His Heart Is Giving Up On Him, This 2-Month-Old Needs A Surgery At The Earliest To Survive | Milaap
loans added to your basket
Total : 0
Pay Now

His Heart Is Giving Up On Him, This 2-Month-Old Needs A Surgery At The Earliest To Survive

Shares
Shares
Share on whatsapp
“Your baby needs a heart surgery soon to survive,” they told a shocked Monu as he held his baby in his arms. His baby, who is barely 2-months-old, hardly the size of his arm – so little, but such a big fight ahead of him. Tejas has not one, but four heart defects. When you look at him, he seems okay, maybe even healthy, but his heart is giving up on him. And with every passing day, the symptoms are getting worse.

In a few weeks, it will be too late to save him

Monu and Reena are as helpless now as they were one month ago when they found out about Tejas’ disease. The day they brought him home from the hospital, their house was filled with family members, laughter.

“Who would’ve thought that just a month later, we would find out that our baby doesn’t have time to live. When you look at his picture, do you see a sick baby? I don’t…but there’s so much wrong with him. We don’t have long to save him. He needs the heart surgery before it’s too late.”

Baby Tejas’ fingers, toes and lips turn blue often now. He gets breathless and starts crying. Monu and Reena have spent many sleepless nights trying to pacify him. A surgery is the only cure.

Monu has many people depending on him – his wife and two kids, his ailing parents and the rest of his family. His lives in a joint family, and is a daily wager. Work is irregular and it’s never the same work every day. On good days, Monu earns Rs. 400, and on bad ones, nothing. Baby Tejas has had to have many tests in the past few months – they had to even borrow the Rs. 1,500 needed for one of them.

“I can’t afford the 3 lakhs for his surgery. I know I have a few weeks, but even that’s not enough. For a poor man like me, it’s not possible to get that kind of money even in one year. I don’t have anything to sell either. I’m helpless."

Baby Tejas should be in the hospital getting surgery. Instead, he’s at home, his symptoms getting worse, his heart failing. He needs your help. 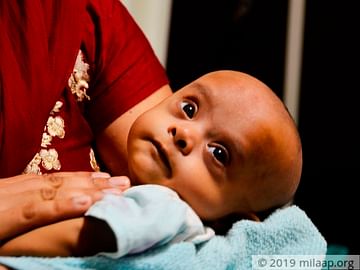 Tejas needs a heart surgery at the earliest to survive. You can help save him.

UPI: givetomlpmonusonaliya1@yesbankltd (Copy to clipboard)
Or
Click here to read the instructions before you make a bank transfer.