Tasleem is battling a terrible cancer and she doesn't even know it | Milaap
loans added to your basket
Total : 0
Pay Now

You are sending a message to
PraveenKumar Bidri
Go back

Shares
Shares
Share on whatsapp
Tasleem is a 15-year-old with blood cancer. She is a shy, quiet girl and her father Rahiman Sab has still not told her that she is suffering from a life threatening illness. He is afraid of what it might do to his already ill daughter. Rahiman is a small farmer and he has already borrowed heavily to treat her. He needs help saving Tasleem.

Tasleem got the wrong treatment for 4 months

Tasleem lives with her family in Jewargi, a small village in north Karnataka. The family of eight depends on a small farm for their survival. Every year – the harvest brings them Rs 80,000 per year. Tasleem is her parents' youngest daughter and everybody's favourite.
Tasleem with her parents and brothers

She fell sick with fever and neck pain in January. When she was taken to the local doctor, the doctors started treating her for thyroid. She underwent the treatment, but as months went by, her fever did not go down. She became weaker every day and her parents started worrying.

“We spent over Rs 60,000 thinking that she had a lump in her thyroid and that needed to be fixed. When she became so sick, we took her to Hyderabad. There she was diagnosed with blood cancer. All these days my daughter was suffering this horrible illness and she was taking the wrong medicine,” Rahiman says.

Tasleem is her parents' youngest daughter

Because of the delay in treatment, Tasleem had to immediately begin strong chemotherapy. The chemotherapy has changed Tasleem's life and made her very sick. She is unable to eat anything and has no appetite or energy left. All the while, every one in the family thinks she is getting treated for a problem with her thyroid glands.

The family needs a hope to carry on

Tasleem or any one in her family does not know that she is fighting a battle for her life. Rahimaan has decided to take on the full burden of worries on his shoulders alone. He knows that if he told any one in the family that little Tasleem has cancer – their whole life would come to a standstill.

“A person needs some hope to go on. We are poor people and can't hope for a lot of happiness. But I cannot take away what little peace my wife and children have by telling them that Tasleem has cancer. It would break them and I cannot imagine what will happen,” Rahiman says.

Rahimaan has already borrowed heavily and spent over 3 lakhs on Tasleem's treatment. He needs Rs 8 lakhs more. Even if he were to sell of his 2-acre-farm he would not be able to raise the money needed to pay for Tasleem's treatment. He has exhausted all his resources and he needs urgent help to save his child.
Help this poor farmer save his youngest child and get her chemotherapy that will save her from cancer. Contribute now.

The specifics of this case have been verified by the medical team at the concerned hospital. For any clarification on the treatment or associated costs, contact the campaign organizer or the medical team.
Click here to contribute.
Donate 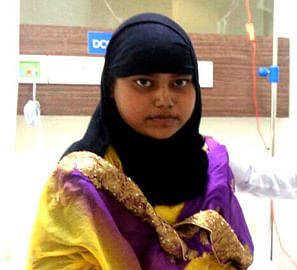 Help Tasleem get treatment for cancer