This 10-year-old's Body Is Not Producing Enough Blood Cells. Save Him! | Milaap
loans added to your basket
Total : 0
Pay Now

This 10-year-old's Body Is Not Producing Enough Blood Cells. Save Him!

"I have cried so much that my tears have dried up. My wife is so depressed that she doesn't even say a word anymore. Just sits by his bedside all day grief struck. We have nobody to turn to now. Those who offer us words of strength are equivalent to God. You are God to us. Only you can save him."

10-year-old Sumit grudgingly went to school like any other child on a normal weekday. His parents received a call from the teacher asking them to take him home as he had dizziness and nearly fainted. What seemed like fatigue turned out to be a diagnosis of severe anemia because his body is not producing enough blood cells. Sumit is now fighting to survive one of the most aggressive diseases to affect children, and his father, a farmer is struggling to keep his son alive.
Hard to believe? For Mallikarjun and Mamata, their life in Bidar with their 16-year-old daughter Shruti, and 10-year-old son Sumit now feels like a long lost dream. The past month has been more than a nightmare right from the day this father took his son home from school. It felt like a regular day plowing in the field when he received that dreadful call.

"I took him to the doctor. They ran a blood test suspecting he was anemic. When they couldn't quite figure out what was wrong. The doctor asked me to take him to Hyderabad. In Navodaya, they admitted him for over 21 days. Every day felt so painful, watching him being pricked and prodded. We did not know what it was until the bone marrow study came back positive for Aplastic Anemia. Although they treated him, we felt anxious. We felt they weren't doing enough, and moved him to a hospital in Bangalore. The doctor there moved back here to Hyderabad. Now, at Citizens, he has said that a bone marrow transplant is imperative for my son's survival."

The family has been torn apart with Mamata staying in the hospital with Sumit, while Mallikarjun is back in the village with his daughter as she prepares for her 2nd PU examinations. Speaking of Mamata, Mallikarjun's voice breaks as he explains how her demeanor has shifted from being the hopeful mother to a grief-stricken woman who has entirely given up.

"It feels like she has locked herself away from everyone in that hospital room. She doesn't leave it even to talk to the doctors. She keeps holding his hand tightly as if she will lose him if she lets go. She does not talk to me or my daughter. In fact, when she does, all she says is that Sumit is now God's child and that if He has created this child, He will care too. She has entirely lost hope."

Parents hold onto every ounce of hope when it comes to their children. In this case, Mallikarjun was ready to take Sumit home when a hospital said there was nothing they could do for him unless he could pay Rs. 30 Lakhs for a BMT. At the time, Mallikarjun had already borne Rs. 8 Lakhs worth medical expenses spending every rupee he had by selling his land, wife's jewels and everything they owned. This was their last attempt. Thankfully, the doctor they met gave them a sliver.

"He asked me not to worry about the funds, that there are people who will come forward to save my son. My wife and I felt God was not there for us. At such a time, when we heard people will be there, we felt they are more than God."

Mallikarjun is a farmer. He has been practicing agriculture on his land and even leased a patch from someone in the village. The fickle monsoons make it hard for him to earn a stable income.

"Unlike others, we don't earn every month. For us it is per year, and that also depends on how much we invest. Sometimes what we put in is more than what we get. At the max, I make Rs. 1,00,000 a year. We reduce our household expenses to a bare minimum so our children can study. Now, I'm toiling on someone else's land to save my son."

Sumit is now confined to the bed. The once active, playful, school going boy, is now sedated, tired, and most of the time afraid of what is happening to him.

"He keeps crying most of the time. It makes me want to cry because I cannot take it that my son is in pain. He rages against me. He says I will go home, I will go out, Do what you want to do or You can't stop me. We feel so much grief for him. I can only imagine what he must be going through. Whatever he has said to me until now, the times he has played in front of me, everything keeps playing in my head like a movie. Am I going to lose my son? Will I be able to save him? These are the questions that are keeping me up!"

Mallikarjun has been matched as a donor for BMT. The surgery has been scheduled and it is estimated to cost a little over Rs. 18 Lakhs. Your contribution will give Sumit a chance at life. This family will forever be thankful for your timely help.

Contribute now to save Sumit.

Click here to contribute to Sumit or for more details on this campaign.
Donate 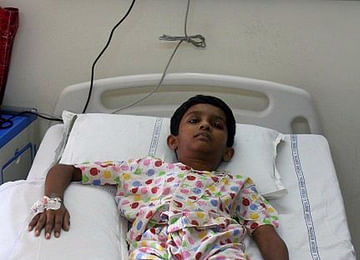 His father is a farmer who has already spent 8L on his treatment. Now he needs a BMT to survive...