Teenager Found Out From Patients In The Ward That He Has Cancer, Thinks He Will Die | Milaap
loans added to your basket
Total : 0
Pay Now

S
You are sending a message to
Sachin
Go back

Teenager Found Out From Patients In The Ward That He Has Cancer, Thinks He Will Die

"Ma told me I had an infection. So many days I had to keep going to the hospital. Ma said that these medicines will make me feel worse and then better. That is how it works. I was bored one day. I was talking to the other children in the ward about cricket. Someone asked me what kind of cancer I have. They said, recently one boy died. That is when I got to know, that my parents lied to me. That it is not just an infection. I am scared I will also die." - Suchit

Suchit has not spoken to his parents in months. It has only been one-word responses to questions. He often resists their advances to hug and comfort him. To Suchit, the world has forsaken him. He is afraid that he could die, and that nobody can help him. The depression makes him weak, and easier for cancer to take his life.

Suchit is the elder child of Sadanand, a driver based in Pune and his wife Shobha. He has a younger brother – 12-year-old Ayush whom he loves a lot, but he’s always wanted a younger sister of his own. That is why Raksha Bandhan was always special to him. When his cousin sisters and the neighbourhood kids tied rakhis on his wrist, he’d swear to protect them against all evil, and this made him feel special. Last Raksha Bandhan, everything was going well as usual, until he fell sick in the evening.


“He started vomiting blood and was running a high fever. We rushed him to hospital after hospital, until he was diagnosed with blood cancer. We didn't tell Suchit about the cancer, we didn't want him to live in fear. However, he eventually found out and is very upset with us for lying to him. He hardly talks or smiles back at us, ”-Shobha, mother

‘He has to wear a mask if he has to go out now, so he prefers staying indoors’

As he is suffering from acute blood cancer, Suchit has to wear a face mask to protect himself against deadly infections now, especially when he goes out. People stare making him uncomfortable, so he hates stepping out of his home now. Ironically, the only place he’s comfortable going to is the hospital.

“He used to hate wearing it, but he’s become used to it now. Even when he’s not covering his face with it, it’s there around his neck always. And when he sees other children in the cancer ward wearing it, he doesn’t feel left out. He’s asked me once – ‘Papa, will I die without this?’ and I had no answer,”-Sadanand

Sadanand drives private vehicles for a living and earns Rs 7,000 a month. Even though he couldn’t afford it, he made sure to send his children to good private schools, as he wanted them to soar in life. Suchit always stood first in his class, and Ayush was also not bad at studies, so Sadanand never regretted this decision. He was already struggling to pay his children’s school fees and manage household expenses when Suchit was diagnosed with cancer.


"With the help from my relatives and friends, I was able to fund Suchit’s chemotherapy till now. But now, Suchit is so critical that chemo alone will not help him survive. He needs a bone marrow transplant costing Rs 10 lakhs that I cannot afford." - Sadanand.

Sadanand wants to save his son. He wants his son to start talking to them again, come home alive. He knows it is possible, but he just needs help. 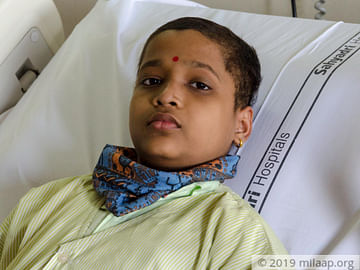 ‘The fear of death is growing inside him'

Suchit does not talk much and keeps to himself now. He needs a bone marrow transplant to survive

UPI: rzpy.givetomlpsuchitsh002@hdfcbank (Copy to clipboard)
Or
Click here to read the instructions before you make a bank transfer.