Srishti Wants To Chase Her Dreams But Two Of Her Vital Organs Are Failing | Milaap
loans added to your basket
Total : 0
Pay Now

P
You are sending a message to
Prema
Go back 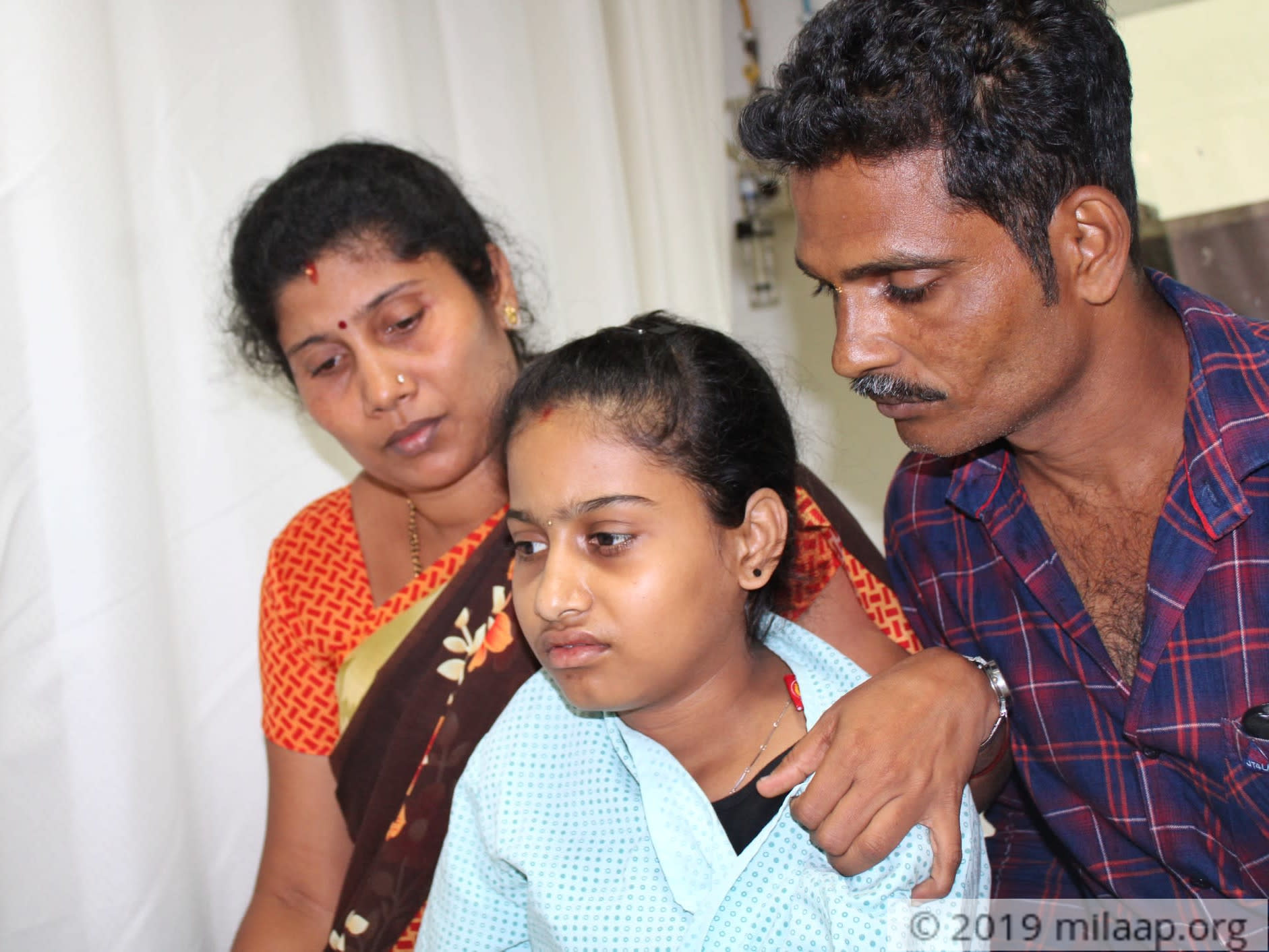 “Before, we would always find her dancing! She’d never get tired of it. Now she struggles to even move her legs. Every time she takes a step forward, she winces in pain. All her dreams have been crushed and at just 14, she has given up on life…” – Poornima, mother.

One winter morning, last October, Srishti woke up to find a pimple on her nose. It was itchier than any of the pimples she ever got and it kept growing bigger. Unable to tolerate the itching, she scratched it and it spread all over her face. Soon, her face was swollen, marked by pimples big and small. She was in pain, but never did she ever imagine she might be battling death.

She begged her parents to make her pain stop

“After 10 days of treatment in the hospital, she was slowly recovering. But just before getting discharged, she complained of a severe stomach pain. She rolled around in pain pointing at the left side one moment, and the right in the next. She begged us to make it stop, but even she did not know where the pain was coming from!” – Radhakrishna Shetty, father

Doctors discovered that both her kidneys had hardened, and failed. Immediately shifted to the ICU, she underwent dialysis 6 times. But her kidneys never got better.

“During that time, she was very weak. She screamed when she realized she wasn’t able to move. We carried her for tests. She wouldn’t eat or sleep. The doctors said she needed a fistula and although we didn't understand it, we realized we couldn't afford it. We were forced to take her home. We tried to keep her safe, but…” – Poornima.

With three dialysis a week, she's spent a year in pain and now she can't anymore

Srishti spent 4 months without any treatment after that, then one day she got very weak and could barely walk. She hadn’t gotten her period during those 4 months, and her entire body was in pain. Worried, the parents rushed her to another hospital where their reality became worse than all their nightmares.

“The doctors told us she was lucky to have even survived for so long. She was diagnosed with a disease we can’t even spell. From then until now, pain is all she has known. She undergoes dialysis thrice a week now. She lives a life of restrictions, because the two most important organs have given up on her – her liver and her kidneys! She was so full of life and had so many dreams... Why her?” – Radhakrishna

Only transplants can save her

Srishti has been diagnosed with Primary Hyperoxaluria – a disease of the kidneys, that’s characterized by an increased amount of a substance called oxalate. In a normal body, enzymes made by the liver keep the oxalate production in check. However, Srishti’s liver fails to produce the necessary enzymes, and it has thus led to hyperoxaluria. The only cure to her condition would be an immediate liver transplant, followed by a kidney transplant.

They want to save her, but they can't afford it and they are miserable

Unable to see her daughter’s struggles, Poornima has come forward as both the liver and kidney donor. Her father begs everyone he knows to lend them some money but to no avail. All these parents want is to save their daughter. But the transplants will cost them 25 lakhs and they are hopeless.

“I assisted workers on construction sites for a living. I used to earn up to 10,000 a month, if I worked on all days. Ever since her diagnosis, I’ve not been able to leave her side. I am jobless now. We have spent lakhs so far, all of it borrowed from friends and family. Now, it’s beyond us…beyond them all. We need help!” – Radhakrishna.

Just as Srishti began dreaming, her battle with life started. Today, she's in pain and has no hopes of ever going back to her normal life. But with your help, she can!

I am sure will be fine one day

Donated to this campaign via Paytm? Click here if you can’t find your donation listed below.
m
milaaphameedrazafunds donated $8,700
A
Anonymous donated Rs.2,000

I am sure will be fine one day