Alcoholic Husband Left Her, Now She Fights Alone To Save Her Daughter's Life | Milaap
loans added to your basket
Total : 0
Pay Now

Alcoholic Husband Left Her, Now She Fights Alone To Save Her Daughter's Life

"My husband was a drunkard who abandoned me and my three children few years back. From then I struggled hard to feed my kids and take care of the family. They are my world and the only reason I live is to see them happy and successful in life. I’m ready to do anything so that they don’t feel a father’s absence. But from the day doctors told me that my little daughter's heart is giving up on her, I’m slowly losing my courage. She needs surgery to survive and I’m afraid that I won’t be able to save her." - Mariamma, mother

8-year-old Shobika was diagnosed with heart disease when she was an infant. Doctors said she won’t need surgery and it would get cured on its own once her heart is fully developed. Six years back she started having breathing trouble and constant fatigue. She couldn’t eat and started getting weaker. Mariamma rushed her to the nearby hospital and there she was diagnosed to have a contraction in the aorta.

"I was confused to see the sudden change in her. She stopped playing like before. She was struggling to breathe and didn’t eat properly even if I fed her. I thought it would be indigestion and took her to the hospital. They couldn’t diagnose her problem for a few weeks. Then looking at her old reports they wanted to check her heart.  It was then they found out that her heart problem has become severe."

Doctors advised Shobika to undergo a surgery at the earliest. But they couldn’t pay such a huge amount at that time and her mother had to take her home without getting an operation. Now after two years, her symptoms got worse and Mariamma had no other option but to admit Shobika for the surgery. She still cannot afford her daughter’s surgery - she doesn’t even have a thousand rupees to pay for the medicines.

She works in a firecracker factory for a daily wage of Rs.170. She needs to roll around 2000 paper pipes a day to get her wage. She's unemployed after the festive seasons as the factories are closed for the next two months. With this little amount, she has to feed three children, send them to school and look after the house. At the end of the month, there is nothing to call as savings.

"It is my father who is begging and borrowing money for treatment from the people he knows. But that is only sufficient to pay for Shobika's checkups and for the travel expenses to the city. How will I pay for my daughter’s surgery when I have nothing with me?  Even if I work overtime at the factory I can't reach even one third of the amount."

It is Shobika’s grandfather who is being a support to this family from the day the father left. Even at 75,  he cuts and sells firewood to the tea shops for a living. He accompanies his daughter and little grand-daughter to the hospital every time and pays for the medicines and check-ups from his little saved money. He skips meals and sometimes manages the whole day by drinking only two cups of tea just to save money for Shobika.

I’m ready to even sacrifice my life to save her, but this old man’s soul is not worth a penny

Shobi is my youngest grand-kid and my favourite. I walk her to school every day and when she returns in the evening she recites everything that happened in her class. She is my happiness and even imagining her not being there in our life breaks my heart. I’m ready to even sacrifice my life to save this little one’s. But this old man’s soul is not worth a penny, only a surgery that we can’t afford can save her precious life. Only God can show us a way out of it - Ramasamy, grandfather.

Please help this mother and grandfather who are doing everything in their strength to save the life of 8-year-old Shobika. Your little contribution can make a huge difference in this child's life. 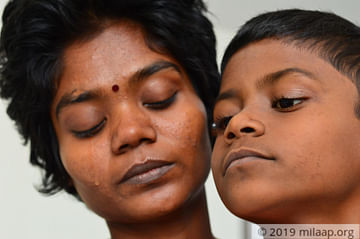 She Has Done Everything She Can, But It's Not Enough

Even if she works overtime or rolls more crackers in the factory, this mother can't save her.