2-Month-Old Who Can't Drink Even A Sip Of Milk Will Starve To Death Without Treatment | Milaap
loans added to your basket
Total : 0
Pay Now

"My baby can have only very little water or milk, even a sip extra causes suffering and makes him extremely weak. He has constant diarrhea. Even if he winces a little, we get scared. There is nothing that we can do to ease his pain. We have already lost a child before we could understand what was happening to her. This time, there is a way to save Aqmar's life but we can't afford it," -  Arshiya Sultan, mother.

Bany Aqmar was seemingly a healthy baby but over the weeks, his parents noticed that he was having continued watery motion. They took him to a local hospital and he was prescribed medicines but it did not help him. He started to lose weight drastically. They took him to a hospital in Hyderabad and was admitted in ICU for 25 days. But there was no diagnosis - Aqmar only got worse. They shifted to another hospital and it was there they found that his small intestine cannot absorb any nutrients and fluids due to a rare disorder and he needs prolonged treatment to recover.


Baby Aqmar before his condition got worse

"He cries in hunger but he can only give him very little milk. If he takes more the next moment he passes watery stools. It is so painful to see him suffering so much. Even the IV fluids can turn dangerous if it exceeds his capacity. He gets dehydrated easily. I don't move away from him even for a little while, I am so scared. I'll not be able to bear if anything happens to him," - Arshiya Sultana

My sister's marriage was postponed to save my son's life

Shaik Saifuddin lives with his aged and ailing parents, sister and his wife and children. He had saved 3 lakhs for his sister's marriage which was fixed on 14th of June. The entire family was looking forward to it but unfortunately their lives took a drastic turn.  Shaik Saifuddin did not have any other choice but to spend the money that he had kept for his sister's marriage for his Aqmar's treatment. Now the marriage is postponed and the family is devastated.


"I feel extremely guilty for what I have done but all I could think of then was to save my son's life. We are waiting day and night to take him back home but I am afraid that I can't afford his treatment," -  Shaik Saifuddin

All our efforts will go in vain, if we do not get help

Shaik Saifuddin  had spent all that he had, borrowed from friends but it is still not enough. He needs 5 lakhs more to continue with the treatment without which he will not survive. Baby Aqmar needs to be in the hospital for next 2 weeks at least to recover completely.


"If we stop the treatment, we'll lose him forever. We have done everything possible now we have nothing left us. I hope Allah shows a way to us, we cannot imagine losing him, please help us," - Shaik Saifuddin

Baby Aqmar is just 2 months old, he is in constant pain. He has a good chance of recovery but without help his life will be cut short. 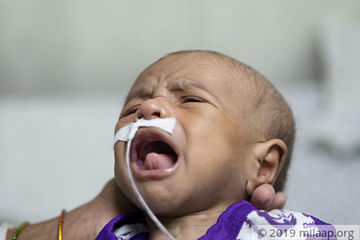 He needs prolonged treatment to survive but his parents cannot afford it anymore.

UPI: givetoshaiksaifuddin1@yesbankltd (Copy to clipboard)
Or
Click here to read the instructions before you make a bank transfer.