His Mother Brought Him To India So We Could Save This 5-month Old's Life | Milaap
loans added to your basket
Total : 0
Pay Now

RR
You are sending a message to
Ramdip Ray
Go back

Shares
Shares
Share on whatsapp
Where Bakhora Khamdora comes from, it takes weeks to receive medical attention for even minor problems, because there are so few doctors, and so many patients. And if anyone needed treatment for anything serious, most hospitals and their employees are so overworked, that they can’t give you good medical care even though they really want to.

It was in this country that Bakhora Khamdora gave birth to this beautiful baby boy - Shahrukh Yusof, or Shohruh Yusufov in their own language - six months ago, and under these conditions that she found out that he had a life-threatening ailment that could kill him any day. All the doctors she approached either wouldn’t or couldn’t treat her precious son.


To save her baby’s life, Bakhora soon realized, she would have to go to extreme lengths…

“I was sitting on the steps of the (local government hospital) and just crying. My husband was on the other side of town on his daily hunt for a job, and I felt so broken and alone as I looked down at Shohruh in my arms. The doctors inside had just told me that there was some piece missing in his liver, and that it was slowly killing him. I’d begged them to fix him, falling at their feet, but they apologized and said they can’t. At that point, I would’ve done anything, anything at all, to save my Shohruh. I just didn’t know what to do, or where to start.”
– Bakhora, speaking through a translator

“A woman touched my shoulder as I sat there on those steps, and asked me what was wrong. I couldn’t talk at first, so she just sat down in front of me and waited until I was able to tell her what the doctors had told me. She listened to me patiently, then stroked Shohruh’s forehead. ‘Go to India’, she said. I didn’t understand at first, but then she repeated ‘Go to India. My people will save your son’. It sounded crazy, but I was ready to do anything. She smiled and walked away after that. I still don’t know what her name was.”
– Bakhora

“Our family is not rich at all, even by my country’s standards, and my husband and I both haven't been able to find jobs. When I told him that night what the doctors had said about Shohruh, and then about the Indian woman’s advice, he didn’t even hesitate. He immediately agreed to it, and so we sold what little possessions we had, borrowed some money from both of our families, and even went door-to-door in our village and begged for more. The next day my sister and I walked all the way to the airport and bought two tickets to India. The only things we carried were the clothes on our backs, and that piece of paper.”
– Bakhora

Unfortunately, the money they had gathered wasn’t enough

The hospital was more than willing to do the procedure for them, and even reduced their fees because of the family's incredible story. But Bakhora barely possessed a fraction of the total estimated medical expenses for the two surgeries (the donation, and the transplantation), and the post-surgery medical care. It had been a terrible blow for her, to have come all this way and then go back, with Shohruh just as sick, if not worse.

“We had to bring our Shohruh back home. But… there’s still some money left. We have just enough money to afford one last trip to and from India. We are now living in worse conditions than ever before, holding onto that small amount of money. Shohruh is the only brightness in our lives, we cannot lose him.”
– Bakhora

This family has struggled so much, traveled so far, to save this baby boy. Now we are his only hope. Let's show them what Mother India is, and help save baby Shohruh from such an untimely death. 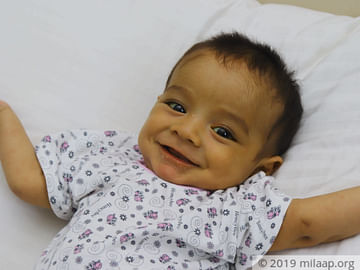