DR
You are sending a message to
Dr Ranganath
Go back

Shares
Shares
Share on whatsapp
Yogavardhana (Yogi) craves a normal childhood. Every day, he watches children his age play on the streets. He wants to join them, but he can't.

Yogi has Thalassemia. His sister Hamsa and he always shared all that they had. But as fate would have it, she too has been diagnosed with the same disease.

Yogi has been surviving on blood transfusions and medications. Unfortunately, this isn't enough to save him. He needs a bone marrow transplant.

Prasan Kumar works as a cab driver and earns Rs. 10,000 per month, but it's nowhere enough to afford his son's treatment.

Sumitra makes candles at home to help with the expenses. But none of this is enough to afford even one child's medicines now. Let alone Yogi's transplant.

"It’s difficult for us to see both our kids fighting this disease every minute of their life. We want to cure them, but we're helpless!"

Yogi might look healthy, but his disease is killing him. His body can't produce blood and he's getting weaker by the day.
Little Yogi has suffered for the past 8 years; and his parents, with him. You can help them cure him of his sickness, and let him live life like he should, like the other kids.
Donate 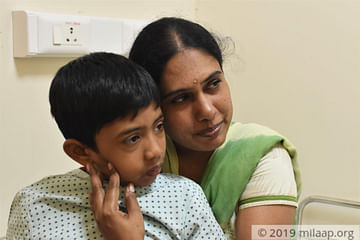 For 4 Years They've Struggled To Save Their Son, He Is Critical Now

8-year-old Yogavardhana doesn’t know what it feels like to lead a normal life.