Helpless Father Struggles To Save His Girl Child From Bleeding Out To Death, Needs Urgent Help | Milaap
loans added to your basket
Total : 0
Pay Now

Helpless Father Struggles To Save His Girl Child From Bleeding Out To Death, Needs Urgent Help

“I carried my 8-year-old daughter in my arms in the crowded train. She was throwing up blood constantly, the handkerchief I had was soaked in blood. There was no place to sit. I held her close to me the whole way to Hyderabad, praying that she makes it, that we get help in time. I didn’t have money to even call an ambulance. It was the most helpless I have felt, watching my daughter suffer in my arms.” – Raju, father

Raju and Sharanya reached the hospital in time, but her condition was critical. She was bleeding in her stomach because of her liver disease. This time, no number of hospitalizations or medicines can save her – Sharanya needs a liver transplant at the earliest.

Sharanya has been fighting liver disease for 3 years now, and for 3 years her helpless parents have been doing everything they can to keep her alive. After almost a year of recurring vomiting of blood and hospitalization, this little girl’s condition was diagnosed. Raju and Saritha are from a small village, and are not very educated.

“People in some villages believe girls to be a burden, but Sharanya is everything to us. Someone even told us to give up on her treatment because we had already spent everything we had on her for 3 years. How can a parent ever give up on their child? Especially when there is hope for her. It’s our poverty that is standing in her way.”

Sharanya has a condition in which the vein that brings toxic blood from the intestines to her liver is blocked by a clot. It causes bleeding in the food pipe. Sharanya has undergone several procedures to treat the bleed, but it’s not enough. The bleeding can kill her if she doesn’t get the liver transplant in time.

Sharanya tries not to cry despite being in excruciating pain

Sharanya hasn’t gone to school ever since she started vomiting blood 3 years ago. She is now 8, away from the childhood she once had – going to school, playing with her friends. Now she’s at home, mostly lying down on her bed, clutching her stomach because of the unbearable pain. But more than the pain, Sharanya fears going to the hospital and getting injections.


“She tries not to cry in front of us because she’s scared we’ll take her to the hospital. She’s trying to stay brave, but our daughter is only getting weaker by the day. She doesn’t look like she’s critical, but she’s bleeding on the inside. Her condition is very serious.”

With no work or stable income, her parents can’t afford her life-saving transplant

Raju can’t find regular work anymore, he doesn’t have a stable income. He is a plumber and earns Rs. 500 per day when there is work. Saritha works on others' farms. They have borrowed over 6 lakhs from their relatives, and got 1 lakh after selling the jewellery they had. After years of treatment, they have no way to afford her life-saving transplant.

“I had to stop sending my younger son to school as well. We don’t have any money left with us. We have to borrow to even take her to the hospital. As her father, I should be giving her a better life, but I’m the reason she’s suffering so much. I have to find a way to afford her transplant.”

Sharanya will lose her life to liver disease without urgent help. Her condition is rapidly deteriorating, and she needs a liver transplant at the earliest. You can help save her life. 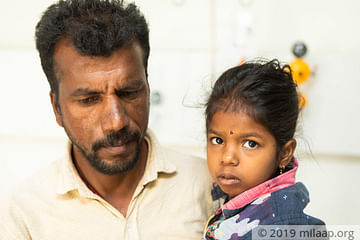 Sharanya needs a liver transplant at the earliest to survive.

UPI: givetomraju1@yesbankltd (Copy to clipboard)
Or
Click here to read the instructions before you make a bank transfer.