“My 11-month-old son, Kavin, is very cheerful and happy. He loves playing with me, he only falls asleep when I tell him stories. Everything about him would seem normal to you till you see the hole in his stomach from which he drank milk - he couldn’t eat or drink from his mouth. He was born without a food pipe,” - Sarjeet, father.

Luckily for Kavin, his parents could afford a surgery that replaced his food pipe. The surgery took place yesterday but Kavin needs to stay in the hospital for at least another 3 weeks. Sarjeet has nothing left to afford that.

Kavin has been fighting battles since he has been born

Sarjeet and Saranajeet’s baby boy Kavin was born with his food and windpipe fused. He was unable to have a single drop of his mother’s breast milk or even breathe. With no other way out, Sarjeet took his baby to Delhi from Uttar Pradesh to get him treated.

Saranjeet with her baby boy

“Doctors told us that only an immediate surgery can save him now. But they also added that our son would need another one when he is of the right age and weight. Without this he won’t have  a normal life. His surgery is over but the risk isn’t - he still needs medical care.”

Sarjeet, a farmer in Uttar Pradesh, makes about Rs 6000 a month. He has had a tough time trying to arrange money for his son’s surgery. He has worked on others’ farms and done extra jobs to save every rupee. Now he needs over 5 lakhs more, he can't do that without help.

“Saranjeet and I have only hoped to give our son the best of everything. We had stopped spending on ourselves since we knew that Kavin would need another surgery - we have been saving since then. But that hasn’t been enough. My relatives have also helped me a lot but there is only so much they can do.”

The last time Kavin needed a surgery, so many of you came forward to help him. Now he needs your help again - his father is looking up to you. With your help, they can take their baby boy home.

Your support can save this baby's life

Click here to save baby of Sarjeet and Saranjeet 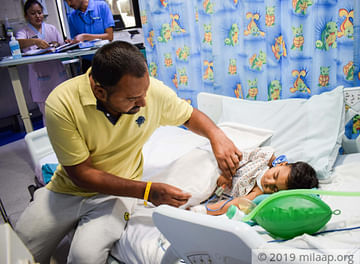 A Surgery Has Given Him A New Food Pipe, But He Still Needs Treatment

Kavin needs to stay in the hospital for another 3 weeks, but his father can't afford that