10-Year-Old With Cancer Reads The Quran 5 Times A Day Believing It Will Cure Her | Milaap
loans added to your basket
Total : 0
Pay Now

Shares
Shares
Share on whatsapp
Sara does not know that she has cancer. Her parents have told her that she is in the hospital because of a vitamin deficiency. She believes them but she cannot understand how she became so weak and lost all her hair. She senses that her parents may be lying to her about her condition, but she does not confront them. Instead she has taken to reading the Quran 5 times a day. She wants to join her father when he does Namaz, but her legs hurt and she cannot kneel down for more than 5 minutes. No matter whatever the reality of her disease, she thinks this will cure her and that she can go back to being her old self very soon.


“She used to love taking selfies every single day. She loved dressing up. She rarely looks at herself in the mirror now, and whenever she does, she says ‘This is not me’. I just wish we could save her from this, but our finances won’t let us,”-Mohammed Sharif, father.

She tells other kids in the cancer ward – ‘It’s okay, you will be fine’

Sara was found to have acute blood cancer after she fell sick repeatedly over the last few months. After her recurring fever and cold along with fainting episodes did not get better, a comprehensive blood test gave way to the deadly diagnosis. It has been 2 months since Sara has been undergoing chemotherapy. In this brief period, she made a few friends in the cancer ward – innocent children like her who do not know they have cancer.


“When her friends cry on getting injections, Sara is the one who consoles them. She assures them that they will be fine and that they can go home soon. She talks to them about her school, reads books to them – it is heartwarming to see her trying to make others feel better despite going through suffering on her own,”-Tanzeed, mother.

‘With Allah’s grace, we could fund her treatment till now, but we have nothing left to continue it’

Sara is the third of the five children of Mohammed Sharif and Tanzeed. She is the brightest of the lot – her parents had high hopes for her but all that is now lost. Mohammed Sharif is an AC mechanic. Despite going through financial crunches every now and then, he made sure to send his 5 children to school and take care of their every need without hesitation. But now that Sara is terribly sick, he has been spending all his earnings on her treatment, but even that is falling short as she needs to get admitted every other week.


Sara (far right) with her mother (centre) and four siblings: an old photo

“Kind friends and relatives have been helping us so far, but how long can they keep helping? Even they have limitations. I am just grateful to Allah for everything. But I don’t have a paisa to continue her treatment. Please help me,”-Mohammed Sharif.

This brave girl needs your help to fight cancer. 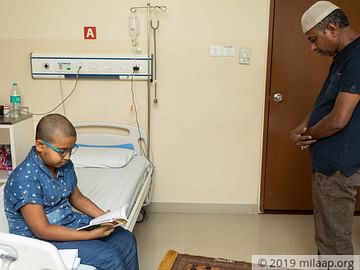 Cancer has made her weak and unrecognizable, but it hasn't hurt her spirit

Sara longs to go back to school and study well. Please support her treatment.