Save 55-year-old Salomi from a fast, dangerous blood disease

Shares
Shares
Share on whatsapp
Salomi is a 55-year-old with Acute Aplastic Anaemia. Because she was previously healthy, the disease progressed rapidly before it was diagnosed. Her body has stopped producing any blood and she needs a bone-marrow transplant to survive. With an annual income of Rs 60,000 her family fears that they will not be able to save her in time.

“Mother used to be healthy. She had no blood pressure or heart problem or diabetes. She fussed over us and worried about our minor health problems. She is getting worse every day and we don't know what to do,” says her son Ramesh.

Ramesh himself has undergone a small surgery for spondilytis. At the moment, he manages his job at a hospital, takes his mother to the hospital and takes care of father, wife and two children. He is the sole earner in the family and makes only Rs 5,000 per month as a radiology technician.
At the moment, Ramesh is very worried about his ability to fund his mother's treatment. When he begins talking about his mother, his voice breaks and his fear for her life comes through. “She is the strong one who is always present when I need her. I can't imagine life without her,” he says.
Ramesh has so far, spent all his savings and borrowed money and spent Rs 50,000 on Salomi's treatment which includes all her medicines. Now, he need Rs 15 lakhs for a bone-marrow transplant that can save his mother's life.
Salomi with her family

A disease that struck out of the blue

This January, Salomi suddenly fell sick. She had a fever, weakness and vomitting. When she fainted, she was rushed to the hospital and the blood tests revealed something very scary to the family. Salomi was diagnosed with Acute Aplastic Anaemia – her body has stopped producing blood cells. Her blood cells' count had fallen dangerously low and she needed urgent blood transfusion.
Salomi was then taken to KIDWAI and given chemotherapy but it was of little use – the disease had progressed too much. She had bone-marrow failure - which meant that her bone-marrow produced no blood cells. The family has kept her alive with blood transfusions and she has taken 32 transfusions in the last 2 months.
In just two months, the doctors told Ramesh that a bone-marrow transplant was the only way to save his mother. But the procedure is beyond his financial means and the family is heartbroken.

“Even now, my mother cries because we have spent so much money on her treatment. But nothing is as important as doing all that we can to save her. I want her to fight the disease and not give in to despair,” Ramesh says.

No matter how much her family assures her, Salomi finds it difficult to cope with her reduced mobility. She is hoping she can get better and help her son and his wife who had a baby three months back. Salomi doesn't like being the reason her son misses his duty in the hospital.
With a bone-marrow transplant, this family will get back the Salomi who connected everyone as a family. Let money not be the reason they lose her.
Donate 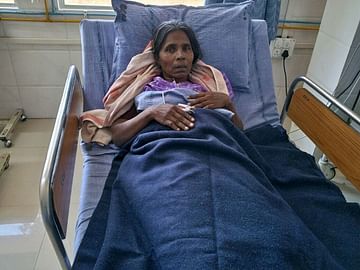 Without treatment, Salomi does not have much time

Salomi has had a bone-marrow failure and her body no longer produces blood. She needs treatment.