At Just 17 She Has Cheated Death Twice Already, She Needs Your Help To Do It One More Time | Milaap

At Just 17 She Has Cheated Death Twice Already, She Needs Your Help To Do It One More Time 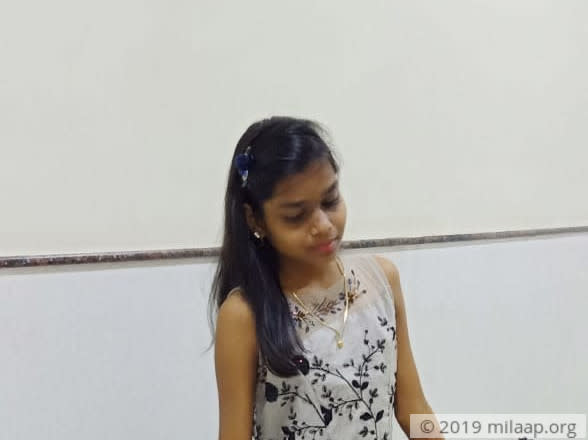 Share
‘Your daughter’s condition is too critical. Most likely… she won’t make it. You know that, right?’
Twice over the past 4 years I have heard this about my Sakshi. Every time I take yet another loan, or sell yet another piece of my wife’s jewellery, I’ve been told to ‘please reconsider’, because it might be a waste of money. I just say ‘My daughter’s a fighter. She has been fighting her whole life. I’m not going to surrender either.’
Now, for the third time, they're saying  ‘She’s too critical’. This time too I want to keep fighting for her. But… I have nothing left...
– Jawaharlal, father

Sakshi started having blood in her stool and severe abdominal pain when she was just 6 years old. After two years of running around from doctor to doctor, she was finally diagnosed with Ulcerative Colitis at 8. This is a chronic condition where highly painful and pus-filled blisters form in the digestive tract of the afflicted. While the condition can’t be cured, it can be managed.

They managed for 5 years, but then her condition led to acute liver failure and now only a transplant can save her life

“The doctors said she’ll need medication all her life, and so we have been giving medicines since 2010. While it controlled the symptoms mostly, sometimes we would still go into her room and find her crumpled on the floor, holding her stomach because of the horrible pain. And after her liver started failing, she has become critical twice. This time, the doctors are saying only a transplant can save her life…”
– Rajkumari, mother

Her father has saved her life twice already, but is now completely helpless

Jawaharlal was born poor in a tiny village that doesn’t even exist anymore. From childhood he has struggled – studying hard and working harder – to achieve a comfortable and stable life, eventually becoming a professor. Once he got married and had kids, he started working hard for their sakes. But over the past 11 years, all his savings have been used up, and over the past 4 years he had to use up all the money he set aside for his three daughters’ education and their weddings. He has nothing left now, and doesn’t know what to do.

She’s been smiling through pain all her life, but the prospect of death has stolen that too

“Even with eyes shut tight because of a sudden wave of pain, she would smile and tell us not to worry. That it would pass. She used to give us strength, not the other way around. And now… ever since she found out that she might actually die this time, she stopped smiling. I want to tell her she’ll be okay, and to smile again, but how can I when I’m crying too?"
– Jawaharlal

This family needs your help. They’ve tried their best to save young Sakshi’s life. Now it’s up to you.
Please contribute as much as you can.
SP
Patient Sakshi Patel is 17 years old, living in Dhamtari, Chhattisgarh
DR
Being treated by Dr. Naresh Shanmugam in Dr. Rela Institute & Medical Centre, Dhamtari, Chhattisgarh