This Single Mother Is Desperately Trying To Save Her 11-Year-Old Son From A Cancerous Tumour In His Stomach | Milaap
loans added to your basket
Total : 0
Pay Now

SS
You are sending a message to
Santhosh Shetty
Go back

“My husband left me and my children because I gave birth to a girl child. He remarried and has left us forever. My daughter is now 6 years old and my 11-year-old  son is living on medicines and chemotherapy. I want to save my son from cancer. This is not the life I had ever imagine for my children. I  am still alive for them.”

Shahida has been living in fear of losing her son, Saifan, ever since his diagnosis two months ago. He has a cancerous tumour in his stomach which will grow rapidly if left untreated. Shahida's husband abandoned the family after she gave birth to their second child, a girl. With no one for support, Shahida is struggling to continue Saifan's treatment- his only chance of survival

Saifan was never felt sick often. He was very active and healthy. However, his life completely changed in just a few days. He is now fighting jaundice and cancer.

“His symptoms started showing only a few days before we found out it was cancer. He came back from school one day with a stomach ache, and nothing has ever been the same. Everything happened so soon. I still can’t believe that I might lose my son to cancer.”

Young Saifan doesn’t know the severity of his illness. He thinks it’s only an infection that will go away in no time. This has kept him positive despite the extreme pain in his stomach and back. Shahida, on the other hand, is terrified. She hides her fear from her son, assuring him that he will soon be back in school with his friends. However, Shahida knows that Saifan might not even make it to his birthday in October if she can’t pay for his treatment.

Shahida is a single mother. She has two children, Saifan and Simran (6), who she loves more than life itself. Her husband abandoned the family 6 years ago and left them to fend for themselves. Shahida worked as a teacher but was forced to quit her job a few months ago to care for her children. While she has been getting by with help from her parents, she is now struggling to find a way to pay for her son's treatment.


“My husband left us when my daughter was born. He married someone else soon after. I moved in with my parents and they have been my pillar of support ever since. However, I lost my father two years ago. My mother has been helping us with Saifan’s medical bills till now, but we don't have any more money left. It’s difficult for me to get a job now because he needs my constant care and attention."

Saifan will not survive without chemotherapy

Shahida has already spent Rs. 80,000 on his treatment but needs 4 lakhs to continue his chemotherapy. With no regular income, she has no means to arrange for the large amount and might be forced to stop his medicines and chemotherapy.

“I can’t imagine a life without Saifan. I don’t think I will be able to go on if something happens to him. Sometimes I wonder why my little child must endure so much pain. He hasn’t caused anyone any harm, so why is he suffering so much? I pray his pain and suffering go away soon.”

Saifan has Burkitt's Lymphoma, cancer of the lymphatic system. The tumour in his stomach threatens to take away his life if he’s not given urgent treatment. Shahida is a single mother and doesn’t have the means to pay his hospital bills any longer. Saifan needs your help to get chemotherapy.

Our support will ensure that Saifan has a life without pain. 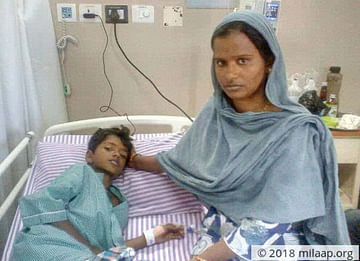 Saifan needs chemotherapy to live. Your support will ensure he gets the treatment he needs.