Boy Living With A Dangerous Disease For 4 Years Before It Was Diagnosed Is Running Out Of Time | Milaap
loans added to your basket
Total : 0
Pay Now

“Over the past 4 years we’ve taken him to different cities, trying to find out why our son was so weak and sick all the time. No one could tell us what was wrong with our Sagar. All they said is that his blood count was low, but even the blood transfusions he was undergoing weren't making it better. He has missed so many days of school, spent so many days in pain. He hasn’t had the childhood he deserves. But even when we didn’t find answers we didn’t give up.” - Papiya, mother

He begs us not to take him to the hospital

Sagar had a recurrent fever when he was born. He looked tired all the time but the doctors said he would be fine when he grows up. Despite taking several medicines his fever kept recurring. When he was 3, Papiya and Raja took him to Vellore and did a complete check up. However, his results were normal. When he turned 5, they took him to a hospital in Mumbai and they were told that his blood count is drastically low - he needed blood transfusions and medicines to survive.


"Sagar would beg us not to take him to the hospital, the pain is just too much. He has become so sad now and hardly talks to us.” - Papiya.

Last December, he had a high fever and became so weak that he could hardly walk on his own. Papiya and Raj were more worried than ever. They were advised by the local doctors to take him to a hospital in Bangalore. It was then that their son’s deadly disease was diagnosed. Their 4 year struggle to find a cure had ended, but Sagar has a long way to go - he needs a bone marrow transplant to survive.


Before the disease took over his body completely

“The first question the doctors asked us was why we were so late in bringing him to the hospital. They said even a small infection can kill him. We haven’t sent him to school since then. He is confined to the hospital. He doesn’t know that he can’t go back home without a transplant, but we have no way to afford it.”- Papiya.

A bone marrow transplant is the only cure for his disease

Raja works as an accountant in a private company and earns Rs 30,000 per month. He has spent around 10 lakhs on Sagar's treatment so far. Papiya was taking tuitions at home to support the family and earned around Rs 10,000. They spend nearly Rs 40,000 every month only on medicines. They were able to continue his treatment with the help of friends and relatives, but they can't go on any longer.

"If we had known earlier that a bone marrow transplant is the only cure, we would have brought him here. All these years we spent lakhs on his medicines. Now we have found the disease and the cure also but we can't afford it. He is our only child and his only wish is to live a normal life like his friends. Please help us save him." - Raja

Together we can help save Sagar's life. 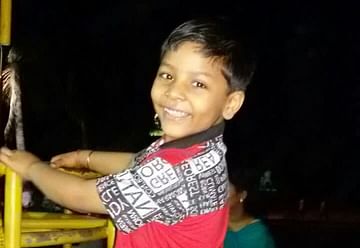 Blood Transfusions Cannot Help Him Any More, He Needs An Urgent Transplant To Survive

His parents have no means to afford his treatment and need your help.