Single Mother Used To Go Hungry So Son Could Eat, Now She Watches Helplessly As He Suffers | Milaap
loans added to your basket
Total : 0
Pay Now

Single Mother Used To Go Hungry So Son Could Eat, Now She Watches Helplessly As He Suffers

Shares
Shares
Share on whatsapp
“I lost my husband. I lost my older son. Must I lose my Rushi now as well?”
– Srilakshmi, mother
Srilakshmi and her husband lost their first son to ALL cancer in 2011. It had been a time of incredible sadness for the couple, but after 5 years of grieving, Srilakshmi got pregnant with baby Rushikesh in 2016. All was well with her pregnancy until her water broke unexpectedly and she had to take herself to the hospital. Her husband had been at work and was rushing to the hospital when he met with a bus accident that cost him his life. As the doctors handed Srilakshmi her newborn son, she couldn’t stop crying as she promised him that she would never let anything happen to him.

But dark clouds followed little Rushikesh too, in the form of an unexplained fever late last year

Rushikesh was a very active and playful child, so at the first sign of trouble, Srilakshmi had taken her son to a doctor. He was given some medication, but the fever was persistent for months. Increasingly worried with each passing month, she took her son to doctors in three different cities to get his condition diagnosed. It wasn’t until February that a doctor in Chennai finally figured out what poor Rushikesh was suffering from: HLH, one of the rarest diseases in India. With HLH, the immune system attacks the patient’s own tissues and organs, including the liver, brain and bone marrow where blood is made.

“After my husband passed away, I taught myself how to sew and I’ve been working as a tailor to keep a roof over our heads and food in little Rushi’s belly. Sometimes it got very hard. Just last year for a few nights I had to go to bed with my stomach hurting from hunger because there wasn’t enough food. I was giving my portions to Rushi so he could sleep happily.”
– Srilakshmi

Because of the HLH, Rushikesh constantly suffers from fever, rashes, and fatigue. It even caused a drastic weight-gain. Occasionally, however, little Rushikesh experiences full paralysis lasting anywhere between a day to a few weeks, because of his condition’s effect on the Central Nervous System (CNS); early this year, poor Rushikesh was paralyzed for 3 months. Apart from all this, he is also at great risk for heart failure, kidney failure, and respiratory distress because of the HLH, which is why he needs an urgent Bone Marrow Transplant surgery.

“I swore I would keep him safe but this is beyond me now. I refuse to give up hope, though. I don’t want to believe that just because I’m poor I have to watch my son die in front of my eyes. I’m placing my faith in all of you now. I close my eyes every night believing that everyone who hears my story will feel the pain I’m going through, and help me bring my son home. Please, please save my Rushi…”
– Srilakshmi

With no one else to turn to, Srilakshmi is now relying on the kindness of strangers. Click here to donate and help save Rushikesh's life by getting him the surgery he needs. 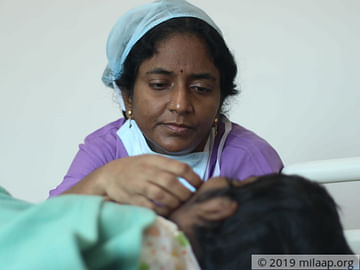 But now he needs a surgery that is too far beyond her means. Only you can help.

UPI: givetomlpmouri1@yesbankltd (Copy to clipboard)
Or
Click here to read the instructions before you make a bank transfer.