This tailor is struggling to arrange Rs 2.6 lakhs for his 4-month-old's heart surgery | Milaap
loans added to your basket
Total : 0
Pay Now

This tailor is struggling to arrange Rs 2.6 lakhs for his 4-month-old's heart surgery

Shares
Shares
Share on whatsapp
4-month-old Rudra is unlike any other newborn. Not because he is born special, but because his parents think has been born unlucky. Rudra Verma is a known case of congenital heart disease, meaning he has a massive hole in his small heart.


Rudra was diagnosed when he was only 2-months-old and was taken to a local hospital in Noida for a routine Tetanus shot. When the family reported to the doctor that he had constant fever and cold, the doctors decided to conduct a heart echo test as they suspected defect in the heart.

Open-heart surgery is Rudra's only option to survive

After many thorough checks, the suspicion became real. The hole in the baby's heart was growing, and the doctors recommend urgent surgery. Rudra's parents were firmly warned that any delay in the operation could prove fatal to the baby's life.


Because of his condition, the baby is not even able to breathe properly. He is suffering from pneumonia and frequently turns blue due to the lack of oxygen. If not treated on time, the baby might succumb to his heart condition.

Rudra’s father, Arvind Prasad is a tailor by profession and manages to make Rs 10, 000 per month. His mother, Asha Devi is a home-maker. The couple also have an elder son together who recently turned 5-year-old.

“We were supposed to put him in school but due to Rudra’s sickness, we had to compromise the elder one’s education. We don’t have the money to look after both their needs. Given the urgency of Rudra’s condition, we decided to keep schooling on hold,” said the father.

Rudra needs to undergo open heart surgery and the approximate amount of entire treatment is Rs 2.6 lakhs. The family has somehow managed to arrange Rs 50,000 but are finding it difficult to make ends meet.

“Such is our time now that no one is ready to lend us any money. We are really hopeless. I don’t know where to go or what to do. I just hope that by some miracle my child survives. I will never be able to forgive myself if I lose my child only because I am poor and can’t arrange funds for his surgery,” said the father.

Rudra is barely 4-months-old and has his entire life in front of him. The little one needs to undergo urgent open-heart surgery if he is to live to see another day. Funds raised through this fundraiser will go towards his surgery. 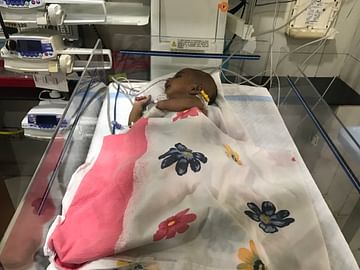 Baby Rudra needs an urgent surgery. Unfortunately, his father cannot afford it and needs our help.