He Drives An Auto And She’s A Maid, Together They’re Struggling To Save Their Son | Milaap
loans added to your basket
Total : 0
Pay Now

He Drives An Auto And She’s A Maid, Together They’re Struggling To Save Their Son

Shares
Shares
Share on whatsapp
Lakshmi is now frantically running from one shop to another. She stops people on the footpath, showing them a photo of her 8-year-old. She begs them for help, but she can’t even finish her sentence without breaking down. Everyone thinks she’s lying. But Lakshmi’s son, Revanth, has been fighting to survive in the ICU for over 20 days now.

“He’s paralyzed from the neck below. He’s only 8…what if he can never move?! I have to go back to the hospital to be with Revanth. That’s when my husband will go out looking for help. This is the only way for us. We have nothing.” – Lakshmi, mother

It was a Monday. Revanth had happily come back from school, just as he always does. He then accompanied his mother to the nearby temple. While Revanth prayed for a new colouring book, Lakshmi prayed for the health and happiness of their family of 4. That was the last time Revanth was active.

“We came back home and he started vomiting. He went to bed saying he’ll be fine the next day. That was the last sentence he said. The next morning when I tried to wake up him, he just couldn’t move. His head was tilted to one side, he couldn’t lift his hands, he couldn’t swallow the water we gave him…I didn’t know what was happening to my child!”

Revanth was immediately admitted to the ICU. He has Guillain-Barre Syndrome, a rare disease in which the body’s immune system attacks the nerves. Revanth can’t move or breathe on his own. The only way he can survive this is with continued ICU care.


They have to stay strong, even when all they want to do is cry at their helplessness

“No one had anything bad to say about Revanth. He came first in extracurricular activities in school, he’s very good in his studies. He loves to sing, and every time he came home from school, he would be singing a new song. He was so happy before this…so healthy and then suddenly all this..”

It’s devastating for any parent to watch your child so helpless, fighting for life. Lakshmi and Shivaram have been inconsolable on most days. But they have no option but to stay strong. Unfortunately, after all these days, they just can’t afford his treatment any longer.

Lakshmi works as a domestic help and Shivaram is an auto driver. They’ve worked hard for years to be able to sustain their family. But together, they earn around Rs. 5000-7000 per month and that’s only enough to feed their sons and send them to school.

“It feels like God is punishing him for no fault of his, why him? It should have been me…he has his whole life ahead of him!”

Lakshmi and Shivaram have somehow managed to spend 4 lakhs till now. They can’t afford any more. They are doing everything they can, begging even, but it’s not enough. Revanth can get better, only with your help.
Donate 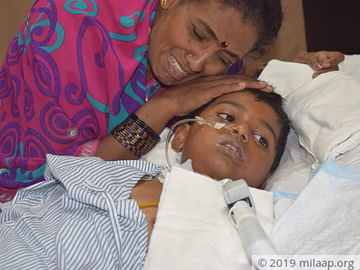 Revanth needs to stay in the ICU for longer. You can help him.