Even 54 Tablets Can’t Take Away The Pain For This Cancer-Ridden 1-Year-Old | Milaap
loans added to your basket
Total : 0
Pay Now

You are sending a message to
Md Ishteyaq
Go back

“On 22nd May, the night of Ramzan, when I went to feed Rayaan, I felt like a touched a boiling pan as his fever went till 104 degrees. We took him to a hospital in Dhanbad where the doctor assured us it was just malaria and gave him a bottle of blood along with medicines. We took him home but within a day or two his condition worsened. He was in so much pain - he kept wailing, calling out to me - Ammi, Ammi” - Sultana, mother of 1-year-old Rayaan.

With 54 tablets already given to their 1-year old, Sultana and Tanweer feel each day they are failing as parents to protect their baby

After months of running here and there to different cities with their baby for treatment, they finally got to know Rayaan has a growing tumour in his kidneys. They had heard the name of the disease for the first time in their life. They still can’t believe that what they thought to be just fever was actually cancer. Not only has Rayaan lost his appetite, but he is not able to eat anything orally due to the burning throat and has to be fed only using tubes.


“When my first child was born, we named him Ayaan which means a gift from God. After three years, when I was blessed with another baby boy, we decided to name him ‘Rayaan’ which means plentiful because now our lives were complete and there was nothing more we could wish for from Allah. But now I am living in the constant fear that I will lose Rayan,"- Sultana, mother

Rayaan’s elder brother Ayaan keeps asking when will they come back home. He misses playing with his little brother.

"He is so upset that we didn’t get Rayaan home for his second birthday. Ayaan has stopped going to school saying he will only go to school once we are back home. Everyday on the phone we have to lie to him. Tell him that we will come home soon. But we don't even know if Rayaan will come home alive..."

Rayaan’s father, Md. Tanweer, is already under a lot of debt as he is not able to meet the medical expenses. He earns Rs.10,000 - a single injection for Rayaan costs him Rs 15,000 daily.  He works as a counsellor at a medical unit under Swasthya Kendra in his village.


"I help patients every day get better - guiding them to take the right medicines. Never in my dreams, did I think that one day my own child will on the brink of life and death. I have spent more than he can ever earn - now my only option is to sell off our house in Dhanbad. But will that be enough?" - Tanweer.

They need 4 lakhs to save little Rayaan's life but these poor parents can't afford it - a generous contribution from your side can help them. 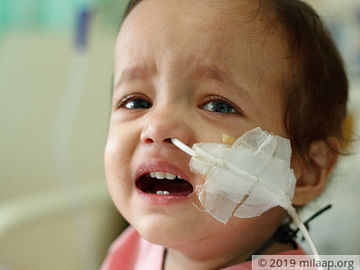 Rayaan Is Just 1 And Is Fighting Cancer, He Needs Urgent Treatment

UPI: givetomlptanveeral@yesbankltd (Copy to clipboard)
Or
Click here to read the instructions before you make a bank transfer.