Ramya missed her NCC exam when she was diagnosed with this disease. Your support can help her get treated successfully and pursue her dream! | Milaap
loans added to your basket
Total : 0
Pay Now

Ramya missed her NCC exam when she was diagnosed with this disease. Your support can help her get treated successfully and pursue her dream!

Shares
Shares
Share on whatsapp
It was just another day for Ganesan, who was patiently waiting outside the school gates, waiting for the bell to ring, as he had been doing for the last 8 years. The scorching sun and the dusty roads no longer mattered to the 48-year-old father of two. His mind was occupied with something more important. His 15-year-old daughter was diagnosed with Thalassemia Major - when she was 7 years old.


Ganesan, an electrician originally from Arupukottai Taluk, in Virudhunagar district, from TamilNadu, lived in a modest 1 bedroom apartment in the southern part of Mumbai with his wife and 2 daughters. Ganesan had been running a small yet marginally profitable electricals and electronics shop, that managed to pay the rent, daughters' school fees, groceries and even have some savings in the end.

All was well for Ganesan and his family. Mumbai had been kind to them. But life had other plans for them

All was well for Ganesan and his family. Mumbai had been kind to them, and the devoted father was not going to let any hurdle get in the way of his daughters' education. A standard 10 graduate, Ganesan could never schooling and college for himself. He dropped out of school, and started apprenticing under an electrician, and soon learnt the trade himself. By the time he was 24, doing odd jobs at houses, he managed to save up enough money to move to Mumbai for his family and set up shop.

Ramya was diagnosed 8 years ago with Thalassemia Major

However, 8 years ago, Ramya, his second daughter fell extremely ill. Her appetite deteriorated. She stopped eating completely and looked pale. Upon initial check-ups, she was ultimately diagnosed with Thalassemia Major. Ganesan was hell bent on getting his daughter treated successfully, and so decided to take her to the General Hospital back in Virudhunagar.

The treatment for Ramya was Bone Marrow Transplantation. This required a donor, and since there was no match from the family, an unknown donor match was required for the treatment to start.

"The senior doctor told me to take Ramya to the US to find an unrelated donor match. I am the only bread winner in the family, I do not have that kind of money. I took out all my savings, we took all our money, and told the doctor, that this was not a viable option," said Ganesan.

After a long wait of 8 years, a match was found to go ahead with  Ramya's treatment, a great moment for Ganesan and his family

Ganesan was then referred to Meenakshi Mission Hospital to Dr. Kasi Viswanathan, who proved to be a saviour for the desperate family. 8 months ago, an unrelated donor match was found for Ramya.

We are this close to a successful treatment. It kills me that I cannot provide for my daughter completely. We will need all the help possible. - Ganesan, Ramya's father.

Ramya, a top ranker in her class, has been preparing for the NCC

Ramya, a top ranker in her class, has been preparing for the National Cadet Corps. She unfortunately had to miss her NCC exam due to the multiple tests that she has been undergoing.

"My daughter is a fighter and winner. As soon as the BMT is over, she will write her NCC exam and will strive to become a cadet. I have full faith," said Ganesan. 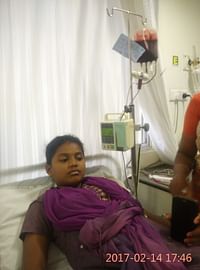 Ramya, a 15-year-old girl strives to become a cadet. She hopes to be treated and rejoin the NCC.