Abandoned By Husband, This Domestic Help Is Struggling All Alone To Save Her Son From Cancer | Milaap
loans added to your basket
Total : 0
Pay Now

Abandoned By Husband, This Domestic Help Is Struggling All Alone To Save Her Son From Cancer

“My husband left me and my sons 8 years ago for another woman. He was not ready to take responsibility for us. He is as good as dead to me and my children. I thought I was enough for my kids, but now I feel defeated as a mother for not being able to afford my younger son's cancer treatment.” – Jayashree, mother

Rakshith is a 16-year-old who is shouldering way more responsibility than any other normal teenager of his age. He has only completed his high school and has not been able to study further due to poverty. Rakshith works in a water distributor company as a supplier and takes care of his expenses and also supports his older brother's studies.

Rakshit is currently undergoing treatment for non-Hodgkin's lymphoma, which is a type of deadly cancer that originates in the lymphatic system. His employers have helped his mother to start off his treatment.  However, Jayashree is unable to afford his further chemo sessions and treatment.

A month ago, Rakshith had a swelling on his neck. Initially, they thought it could be an insect bite; however, the swelling and the pain persisted. The family was shocked when they were informed that it was a cancerous tumor.

Jayashree works a housemaid and earns a meager income of 2000 Rupees a month. Rakshith needs to undergo at least another two cycles of chemotherapy and radiotherapy. The cost for the treatment is estimated to be 4 lakhs, an amount that is way too expensive for Jayashree to afford by any means.


“Our mother works very hard to take care of us. Rakshith, though younger than me, came forward to support the family by working so that I could continue my studies. Somehow, even through struggles, we have been managing to run the family. Now, we do not know how to handle this financial crunch and it’s a matter of my brother’s life. We cannot help but beg to strangers to save my brother,” – Ranjith, brother

Rakshith wants to grow in his field of work and wants to be a water distributor himself one day.

“I want to do a good job one day, I want to be help my mother and brother. And now I’m not even able to move out of bed. I'm feeling so weak and my back hurts. It’s been a month and I don’t know how long this condition would last,” says Rakshith.

This single mother are struggling to raise money to save his son from cancer. Your contribution would mean a lot to them. 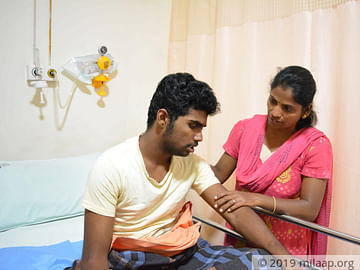