This 3-Year-Old With a Rare Liver Cancer Needs An Urgent Surgery To Survive | Milaap
loans added to your basket
Total : 0
Pay Now

Shares
Shares
Share on whatsapp
3-year-old Preetham used to go to school, was active and played with his friends. A few months ago, he came down with a fever and lost weight. His parents were not worried and took him to the doctor. They never imagined that their son's suffering had not even begun. It was then that Preetham was diagnosed with Liver Cancer. The doctors immediately started Chemotherapy, but Preetham also needs to undergo a surgery to remove the fatal cancerous tumor in his liver.

His Parents Thought It Was Only A Fever

Preetham’s father, Madan, remembers how the news of his baby having cancer devastated him and his wife, Renuka. What they thought was only a regular fever, turned out to be a deadly cancerous tumor in their baby’s liver.

“ It changed our life. We were so taken aback. My wife and I just couldn't speak and sat in silence when the doctor told us it was cancer. We didn’t want to believe it. It took us some time to accept that our little son would have to fight for his life.”

The thought of losing their child frightened them beyond words. After weeks of disbelief, sorrow and panic, Madan and Renuka decided to stay strong to help their child win this battle. Preetham immediately started Chemotherapy.

They Have No Family Support

Madan and his wife have gotten this far by borrowing from friends to pay for treatment. With no other strong support from immediate family, Madan is finding it hard to provide for his wife and son with the bare minimum and pay for the hospital bills.

“We had a love marriage, so we are outcasts of the family. We only have each other in these testing times. Our families are a hesitant to come forward and help us. We had no other option but to borrow from our friends, but how much can we keep asking them?”

Madan and Renuka look to each other for support. However, now they’re more helpless than ever.

Baby Preetham was diagnosed with Hepatoblastoma, a rare, cancerous tumor in the liver. He has undergone 5 cycles of Chemotherapy. He is required to undergo one more cycle, after which he will need an immediate surgery to remove the cancerous tumor. The total cost for the treatment is estimated to be 6 Lakhs. Madan’s salary as an electrician’s assistant is not enough to pay for his son’s medical treatment. They have already spent 4 Lakhs on his Chemotherapy.


While the Chemotherapy has made Preetham weak and restless, there have been signs of improvement in his condition. He is slowly moving towards recovery. However, the treatment will be in vain if the surgery is not done at the earliest.

“Preetham is responding well to the Chemotherapy. We see him making little progress now, but we’re afraid we won’t be able to give him a chance at a full recovery if we can’t pay for his surgery.”

Preetham needs to undergo surgery immediately after his sixth Chemotherapy cycle. His Father, Madan, has exhausted all his savings to pay for Preetham’s treatment and can’t afford it any more. Preetham needs our support to have a chance of a recovery and be a child again.  The surgery is Preetham’s one last chance.

Your contributions will give baby Preetham the life he deserves. 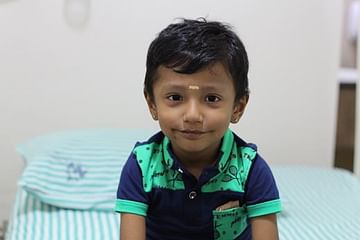 Preetham needs your support to undergo an immediate surgery to defeat liver cancer.