Cancer Is Making 8-year-old's Tummy Swell Until He Feels Like It Will Burst, You Can Help Him Survive | Milaap
loans added to your basket
Total : 0
Pay Now

Cancer Is Making 8-year-old's Tummy Swell Until He Feels Like It Will Burst, You Can Help Him Survive

"When Preetham discovered that the used thermometer in the hospital is often discarded, he asked me if we could take it home since we cannot afford to buy one." - China Das (Mother)

It isn't just the thermometer that has caught this curious child’s attention. This 8-year-old who aspires to be a doctor when he grows up is in awe of all the medical equipment around him. But right now, his big eyes are left with curiosity and a little bit of life in them. His pale limbs are still and his stomach is enlarged. He is fighting Stage 4 Hodgkin’s Lymphoma - cancer of a part of the immune system.

He is taking lessons in Biology from his doctors

Back in Sapmari village in Malda District in West Bengal, Preetham's loved ones including his teachers and friends are eagerly awaiting his return. He is one of the brightest children in his class. His father Kankar Das tells us that Preetham is a child who is always eager to learn new things. Now he is learning about cancer. He wants to be a doctor.

"He wonders why his legs are weak, so much that he cannot stand. He asks the doctor why he can't breathe, how the oxygen mask works, and what these machines are learning from his body. I try to make him watch TV to distract him, but Preetham wants to read about cancer instead." - Kankar Das (Father)

In 5 months, his cancer advanced to Stage 4

Cancer has 4 stages. Stage 4 lymphoma happens when cancer has spread outside the lymphatic system like the liver, spleen, spinal cord. Unfortunately, it took so much time to recognize Preetham's symptoms that he had already advanced to stage 4. Now every moment counts.


"Just after Durga Pooja last year, Preetham got Typhoid. It took weeks for us to know that his liver is getting affected. Until March we tried everything. His stomach kept growing big and his fever would not come down at all. He started feeling like his stomach will burst and kill him. He was in so much pain. Everywhere we went, the doctors said his condition is terrible and we should prepare ourselves to lose him. Preetham's school teacher found someone and helped us come to Bangalore. In the 5 months that we lost, his cancer advanced to stage 4." - Kankar Das

Preetham was immediately started on the first round of chemotherapy. Even a day's delay could have meant no return. Thankfully, he is responding to the treatment. They have to continue for a few cycles but the family has no more money. The remaining rounds will cost them Rs. 5 lakhs. Kankar Das has about Rs. 10,000 left to pay for food and medicines.

"Today he is better. Not cured, just better than yesterday. It will take more days like today for us to go home with our son. We have no option. If we stop the treatment now, he will not live long enough to come back home with us." - Kankar Das

Kankar Das is a small-time farmer who hardly earns 4000 rupees in a month. He cannot afford to even rent a room in Bangalore and lives in the waiting area, using a small washroom and other facilities in the hospital.

He has already spent close to 2.5 Lakh rupees on Preetham’s treatment since November 2018 and all this money was taken as loans from the local money lenders.


"I don't know how I am going to pay more than this. Nobody else will lend me money. I am so scared thinking about interest and debt. All I know is I have to save my son. It is stage 4. I know we don't have time." - Kankar

Preetham wants to be a doctor someday. He wants to save lives. Right now, he needs your help to survive cancer. Your contribution can give him a chance to live and realize his dreams. 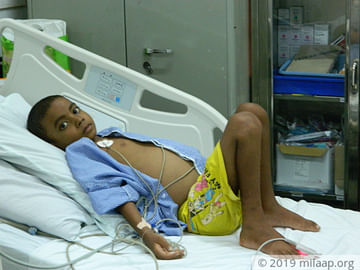 He Wants To Be A Doctor Someday, But First He Needs To Beat Cancer

He needs chemotherapy immediately but his parents cannot afford it.