Even The Smallest Injury Could Prove Fatal For 9-Year-Old With Cancer | Milaap
loans added to your basket
Total : 0
Pay Now

"This is not the first time that my son is sick, but this time he might not survive if I can’t afford the treatment. His condition is so critical that even a small scartch, a small fall can be fatal for him. His blood doesn't clot, he won't stop bleeding if anything happens to him. He could bleed to death. Only a bone marrow transplant can save my child now. But I can’t.. I just can’t afford it.”- Kumar, father

They got to know about Pavan's cancer about 2 years ago.  At that time, he underwent blood transfusion for 4 months in Chennai and got better. He started going to school again, played with his friend and fought with his brothers like every other kid his age. But suddenly in March this year, his cancer was back. He would bleed uncontrollably even if it's a small bruise.

I was able to protect him last time but this time…

Kumar mortgaged his land to save his son last time but now he nothing left. Nothing that he can sell to afford his son's treatment. He has tried every possible way to arrange the money to save his son but failed. He is helplessly watching his son suffer and lives in fear of losing him every day.


“I used to work along with my husband on others' farms but now I can’t leave Pavan alone. I have to look after him. The little bit I would have earned could have helped us, I know, We are in such times when every single rupee counts. But what can I do?”- Bharati, mother

Nishant(13), elder brother of Pavan is the donor for the transplant. Both the kids are unaware that Pavan has cancer and that the only way to save him is bone marrow transplant.


“I don’t know how to tell Nishant. He thinks his brother just needs blood. If I tell him about the surgery he might get scared. And Pavan ...he is just 9. He has no idea what is going on,  it seems as if he is used to medicines and transfusions now, He has stopped asking questions about it anymore.”- Bharati

Pavan is prone to infections and he needs to wear a mask to prevent them. The only way he can be cured of blood cancer is by an immediate bone marrow transplant. Kumar and Bharti are pinning all their hopes on you.

Pavan has stopped living his life like a normal kid and you can give that back to him. Your little help can save Pavan from cancer and his parents from losing their child. 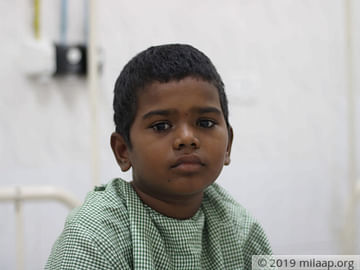 Pavan is fighting deadly cancer, he needs urgent help. You can save him