This Mother Struggles Alone To Save 20-Year-Old Hit By A Drunken Driver | Milaap
loans added to your basket
Total : 0
Pay Now

Shares
Shares
Share on whatsapp
Parthiban was on his way back home from work on his 2- wheeler when he was hit by a drunk speeding auto driver. The impact of the accident threw him around 50 meters away and his head hit at the edge of a barricade on the road. He was immediately taken to the nearby government hospital. His condition was so critical that the doctors asked to take him to another hospital where an immediate surgery on his skull was done to save his life.


"My elder son took me to the hospital saying that he got minor injures, when I saw him lying almost lifeless, I almost fainted. He had no movements in his body. I was crying and calling out his name, but he did not respond. I thought he'll at least open his eyes but his condition was only getting worse with every passing moment," - Saraswathi, mother of 20-year-old Parthiban.

“It has been 4 months since he is lying unconscious in the hospital, he has not opened his eyes yet. I have been crying, begging everyone I know, even to strangers in the hospital to save my son. My husband does not go for any work, he did not even come to the hospital to visit him. I have struggled alone all these years for my children, I live only for them. If I can't afford Parthiban's treatment I will lose him."

Parthiban, young and determined to help his family live a poverty free life

Despite multiple surgeries, he is still battling for life in the ICU

Parthiban had already had two surgeries in his head. He was slowly recovering, but suddenly fluid was leaking through his nose and it couldn't be stopped. After a series of tests, it was found that the fluid leakage is from brain and he got severe infections. These infections are life-threatening and it can affect other organs too without treatment.


"Nurses told me not to cry in the ICU, I don't know if my cries are hinder or help to him, but I couldn't stop crying. If he knows that I'm struggling so much he'll definitely open his eyes. All I want is to hear him calling me "Amma", I don't want anything else in life." - Saraswathi.

"I don't have anything left with me but my son, I can't lose him"

It was because of Saraswathi's hardwork that her two children, Murugan and Parthiban, finished their education and managed to get a good job. She did all odd jobs - worked in farm, construction firms and even as domestic help. Parthiban was working as a technician and was earning around Rs 7000. He had promised his mother that he would soon pay back all debts and worked day and night. A tragic accident has now left this family helpless. They need 20 lakhs to continue the treatment without which he'll lose his life. 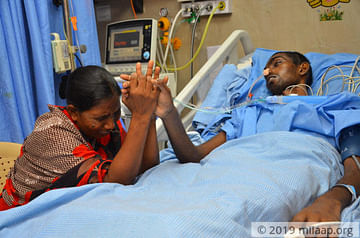 He Is In The ICU For 4 Months Lying Unconscious, He Needs Prolonged Treatment To Survive