1-Year-Old With A Hole In His Heart Is Critical After His Surgery Was Delayed By 2 Months | Milaap
loans added to your basket
Total : 0
Pay Now

“We don’t let him out of our sight for even a second now as his heart can fail any moment. We look out for any sign that shows he is collapsing – the doctors have told us that since his surgery is delayed, something bad can happen to him any moment now. I can’t sleep at night, imagining the worst. I wish I had enough money to save him, but I don’t,”-Jitendra Kumar, father of Baby Parikshit Kumar.

‘When I saw that his lips turned blue suddenly, I screamed’

Within 5 days of bringing their baby boy home, Lokesh Kumari and Jitendra became stressed and worried. Their baby boy’s lips had turned blue and he was becoming completely breathless – Lokesh Kumari couldn’t believe what she was seeing and screamed. After a series of scans, it was found that their little baby had a hole in his heart. This causes his blood to mix, and because the body does not get enough oxygen, his heart works so hard that it would eventually fail.


This baby is living on borrowed time; though he looks fine, his heart can fail any moment

“Doctors told us the day he was diagnosed itself that he would need a surgery before he turned 10 months old. I have been trying to arrange the money required for it since then, but have been unsuccessful. Now he’s 1 and we’re already too late to save him,”-Jitendra

The dosage of his medicines has been tripled, but even that isn’t helping him

Earlier, Baby Parikshit needed to have only 1 tablet per day for his heart ailment. But today, he needs to have 3. But this is hardly helping him get better. His condition is only deteriorating with every passing minute.


“He tries walking, but after taking just two steps his breathing becomes very rapid. I have to run to him and carry him as he starts crying also, which makes his breathing even worse. How long can he continue living like this?”-Lokesh Kumari, mother

Jitendra works as a mobile cover seller in open markets in Delhi. He earns very less – Rs 8,000 a month. His family – wife Lokesh Kumari and son Parikshit live in a small one-room-kitchen flat, for which the rent is Rs 3,500 – almost half of his salary. Ever since he was told that his son would require expensive heart surgery, he has been running from pillar to post, begging everyone he knows to help him. But nothing has come so far.

With your kind contribution, this poor father can save his son from heart failure 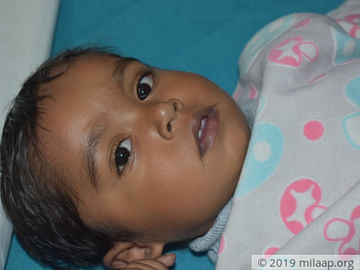 He cannot walk two steps without running out of breath

This child may look normal, but his breathing trouble is getting worse with each passing day