This 8-Year-Old Is Completely Bedridden Due To His Dislocated Spine, Needs Your Help To Live | Milaap
loans added to your basket
Total : 0
Pay Now

This 8-Year-Old Is Completely Bedridden Due To His Dislocated Spine, Needs Your Help To Live

"Despite his curved spine, Parameshwaran remained positive. He has many friends and never wants to miss a day of school. However, I always worried that he won’t be able to do things like other children. When we used to take him to the park, he would watch other kids running around and say “Maa, don’t worry one day even I will be able to play.” But now my son is completely bedridden and can’t speak a single word.” - Swetha, mother

When Parameshwaran turned 2, his parents noticed that he did not hit his milestones, he was leaning forward while walking. They took him to the hospital and found out that he has Atlantoaxial subluxation, a dislocation of the spine. He had a surgery to fix his dislocated spine, however, he recovered only 80%. Parameshwaran continued to have difficulty walking and the curve in his spine was very visible but it never dampened his spirit. He grew up very active, cheerful.


"However, in December last year, he complained of severe back pain and fell when he tried to get up. We rushed him to the hospital. The doctors said that his spine was dislocated again and he had another surgery. We thought this time, he would recover completely, but we were wrong."  - Pattabi, father

He can't speak or move, he just stares at his parents helplessly

Parameshwaran was on bed rest for 2 months but his condition did not improve at all. He was not able to move his limbs and he could hardly take a step on his own. He had another surgery in March this year. Post- surgery he had severe breathing trouble. He underwent a tracheostomy, a surgical opening in the front of the neck into the windpipe to provide an air passage to help him breathe. He cannot speak now and he keeps staring at his parents helplessly, often crying because of his pain.


"Sometime tears roll down his eyes, sometime he smiles at us. We are scared to think of the thoughts running in his mind. For the first time, we see fear in his eyes." - Swetha

They have exhausted all their savings, 14 lakh is beyond their means

Pattabi runs a software business, but for the past few months, he hasn't been able to work. He has absolutely no income and is managing with the help of his friends and relatives. He has also borrowed money at high interests. Parameshwaran has a good chance of recovery but he needs prolonged ICU stay and ventilator support. His parents are struggling to save their only child.

With your help, this 8-year-old can live a normal life 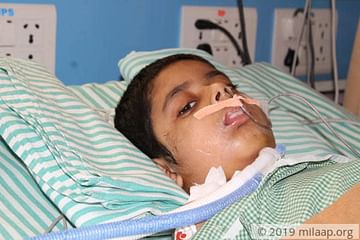 He Can't Speak Or Move, He Just Stares At His Parents Helplessly