Daily Wager Severely Injured In Road Accident Has Not Met Wife And Kids In Months Due To Poverty | Milaap
loans added to your basket
Total : 0
Pay Now

“He just stares at the ceiling most of the time, but sometimes I can see his eyes wandering – he looks on either side of his bed, like he is looking for someone. When he sees only me, tears stream down his face. He can’t say anything but I know that he misses his wife and two children. They were able to visit him only once in the last 5 months as they don’t have money even for the 4 hour bus journey from our village in Keonjhar to the hospital in Bhubaneshwar. My son was the sole breadwinner of the family, and now that he’s struggling to live everyone else dependent on him is suffering too,”-Giridhari Sahoo, father of Nilambar Sahoo.

In November last year, Nilambar was running an errand for a friend and returning from a petrol bunk when a truck hit him from behind. He suffered grievous injuries to his head, limbs and spinal cord. He underwent a brain surgery immediately in a hospital in Cuttack, Orissa but was transferred to Bhubaneshwar when his condition worsened. The only person at his side now is his aged father who has nothing with him except a set of ragged clothes. He needs another brain surgery urgently or he will not survive, but his family will not be able to arrange enough funds for it.

‘I am at the mercy of hospital staff for my meals’

Giridhari Sahoo is weak and cannot walk properly, but he is the caretaker of his injured son now. He does not leave Nilambar’s side even for a moment thinking something bad will happen to him in that interval. He is always chanting mantras and praying for the welfare of his son and often skips meals. This is not because the elderly gentleman is not hungry, it’s because he does not have a paisa left with him.

“The hospital staff found out that I was starving and started buying me meals. But I don’t feel like eating anything most of the time looking at my son. When he can have only liquids through a tube, how can I eat full meals and be satisfied?”-Giridhari, with tears in his eyes.

Nilambar used to work as a daily wager, earning Rs 300 a day before the accident made him bedridden. He was the sole breadwinner of a 6 –member family consisting of his aged parents, wife Lakshmi and children – Kajal (14) and Chinmay (9). The family is so poor that they live in a one-room hut that does not even have a washroom. Nilambar was not only the sole breadwinner, he was also responsible for taking the kids to the school and back. But after his accident, they were forced to drop out as there is nobody else to take them.

“My wife, daughter-in-law and grandchildren are living a very hard life back home. Sometimes our neighbors give them food and sometimes they don’t so they’re forced to go to sleep hungry. I have to take care of Nilambar here and there is no way I can go back home now. We are going through hell as a family,”-Giridhari

Giridhari has used up Rs 10,000 of his life’s savings on his son’s treatment so far. He borrowed Rs 5,000 from the sarpanch (leader) of his village and Rs 5,000 from his neighbors. In all, he could only pay Rs 25,000 to the hospital till now, while the outstanding bill has come up to lakhs and counting. Nilambar still needs an urgent brain surgery costing Rs 2 lakhs, but his elderly father cannot afford it.

With your kind contribution, Nilambar can undergo his urgent brain surgery and meet his wife and kids soon. Please support. 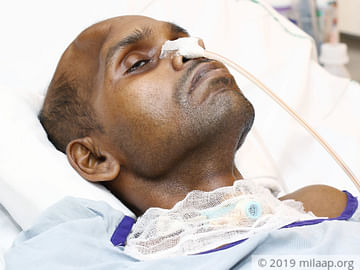 He Can Not Speak, But His tears Reflect His Pain

Nilambar's aged father cannot even afford his meals, has no way to afford his son's urgent surgery