His Mother Nearly Died Trying To Save His Life, Only You Can | Milaap

His Mother Nearly Died Trying To Save His Life, Only You Can Save Him Now 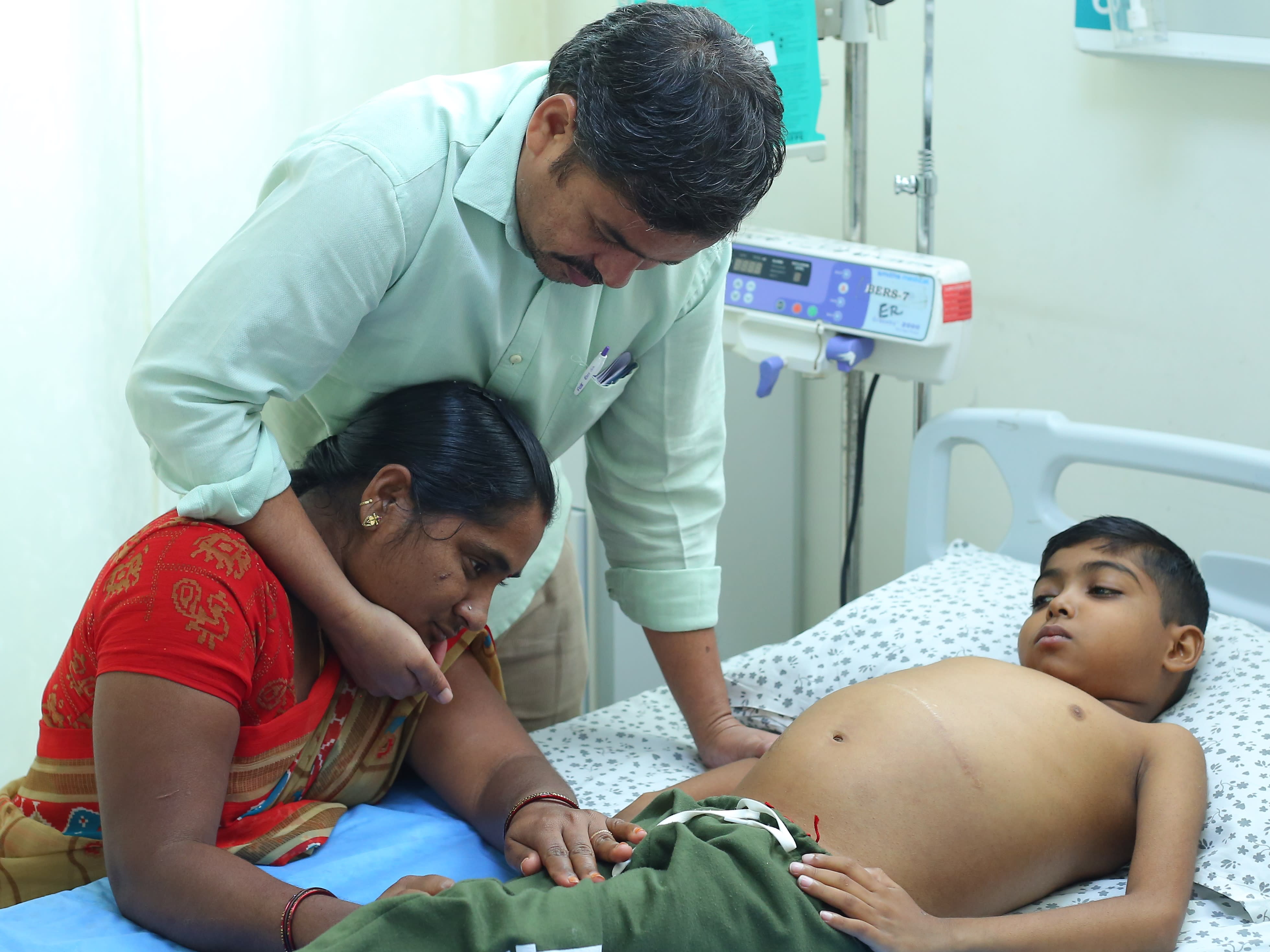 "I just can’t stand to see his pain anymore. He’s only 9, but he has suffered so much because of his failing liver! He’s been fighting for the past 4 years, each new day a new struggle to stay alive.
The last time his condition was critical, I gave him a piece of my own liver. I almost died during that operation, and I’m suffering the effects even now. But my poor boy, he still needs one more surgery and but 18 lakhs is too much."
— Lakshmi, mother, in tears

Four years ago, Nandhan had woken up with a high fever, followed by severe vomiting. All the local clinics suggested it was just the flu and prescribed medicines as such. But despite taking them all religiously, 2 weeks went by and his condition didn't improve.

“He stopped eating, he lost a lot of weight, and had terrible stomach pain all the time. We were really scared by that point, so we decided to take him to a city doctor instead, hoping that maybe they would be able to do something the local doctors weren’t able to do. We never expected them to tell us that our Nandhan’s liver was failing, that he was dying!” – Lakshmi

'We thought the worst was behind us, we had saved our son’s life!'

Nandhan's desperate parents were told that he needed an emergency liver transplant, and Lakshmi had matched as the donor. She and Nandhan’s father, Chandraiah, spared no effort that year, begging and borrowing from everyone they knew: family members, neighbors, and Chandraiah’s co-workers. It had been a long and terrifying ordeal. With every extra week that it took them to put together the money, Nandhan’s condition only deteriorated. But, eventually, they gathered enough, and Nandhan and Lakshmi underwent their respective surgeries. For nearly 2 years after that, Nandan showed positive signs of recovery.

But he started inching closer and closer to death once again, in 2019

“One morning in 2019, out of the blue, Nandhan started vomiting blood! By then his liver failure had started feeling like a old forgotten nightmare, so it didn’t even occur to us that it could be the problem again. But when we took him to the hospital, they checked and told us that... that the previous surgery hadn’t worked, his body hadn’t accepted my liver fully! Within weeks his condition started deteriorating. We tried for more than a year after that to manage with just medicines, but a few months ago his stomach started swelling abnormally, and he’s been in terrible pain ever since!”  — Chandraiah

Ascites, the build-up of fluid in the abdomen, is a horrible sign in Nandhan’s case. It means his liver has reached end-stage and that he could lose his life any day now. He needs another liver transplant, but his family is beyond helpless this time around.

Only your generosity can save Nandan now

With the pandemic last year, Nandhan’s small family has already been struggling financially. Chandraiah, then a daily-wager, hadn't been able to find work for months on end. Now he’s a housekeeper/cleaning boy in a small company, but there’s no way he can afford such a procedure again with the salary from that job. On top of all their regular month-to-month expenses, and the cost of Nandhan’s medicines, Chandraiah’s still paying off the loans he took 2 years ago! This time, without your help, this family will not be able to save their little boy.
Please donate as much as you can, and help bring Nandhan home.
N
Patient Nandan is 8 years 6 months old, living in Hyderabad, Telangana
RC
Being treated by Dr. Prashant Bachina in Rainbow Children's Hospital, Hyderabad, Telangana