Succor Needs One Last Brain Surgery Before He Can Lead A Healthy Life | Milaap
loans added to your basket
Total : 0
Pay Now

You are sending a message to
Evita Rodrigues
Go back

“My children do not even understand the meaning of ICU. How do I tell them that their father is so ill?”

It was during late 2016 that 42 year-old Succor started feeling unwell. He had been experiencing black spots in front of his eyes. His family teased him, saying he needed spectacles in his old age. Until Succor collapsed in front of his children on his birthday, the family was not aware of the tumour in his brain that had caused the black spots.

The birthday that changed everything:

On the 11th of December, 2016- his birthday, as Succor was celebrating with his family, he had a blackout- and started having a fit. His hands and feet started moving, and he began talking in a strange language. His family rushed him to the hospital.
A diagnosis that shocked the family:
After his admission in the hospital, Succor was diagnosed with aneurisms in the brain. This had caused severe brain damage- and doctors suggested immediate treatment. His wife Rita pooled money from selling her belongings and got Succor treated.
Rita is very worried at the moment. He lies battling for his life in the ICU after a brain surgery. Succor needs another surgery in order to resume normal life, but Rita knows that she cannot afford it.

A small but happy family:

Rita has been married to Succour for nearly 10 years. The couple have two daughters: 8 year-old Marishka and 4 year old Shanaya. The daughters are the joys in their parents’ lives. Succor was employed as a driver. It was a small and happy family that lived in Mumbai. Now the family is praying that Succor survives.

A long road to recovery:

Rita thought that Succor was on his way to recovery. This is when doctors broke the shattering news: Succor had multiple aneurysms- and was going to need two more surgeries. Each surgery would cost over Rs 7 lakhs. Rita broke down in tears.
She had worked as a maid earlier before marrying Succor. Her employer, Loretta helped her out with some of the initial expenses. The first surgery happened on the 14th of June, and the next needs to happen within a month. The estimated cost for each surgery is over Rs 7 lakhs.

Marishka and Shanaya ask for their father:

The girls don’t know that their father is in the ICU. They just know that he is in the hospital, ‘for a bit’. Rita doesn’t want to frighten them- and so has not told them how serious Succor’s condition is. The children are waiting for their father to come back and play with them, as he always used to.

Succor used to work as a driver. Since his diagnosis, doctors have forbidden him from driving, as he can have a blackout at any time. The family currently has no source of income. Rita is struggling to ensure that their daughters still go to school. She has no idea how she is going to save her husband. The family has sold all their belongings and spent more than Rs 5 lakhs on his treatment so far.
Succor is the pillar of his family. Your contribution can ensure that this father recovers and lives a long healthy life with his family. Help Save Succor!
Donate 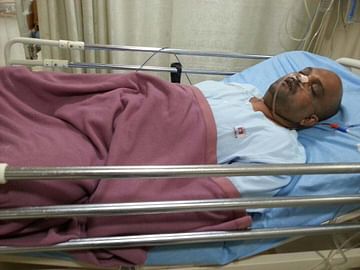 Succor is the pillar of our little family- please help save his life!