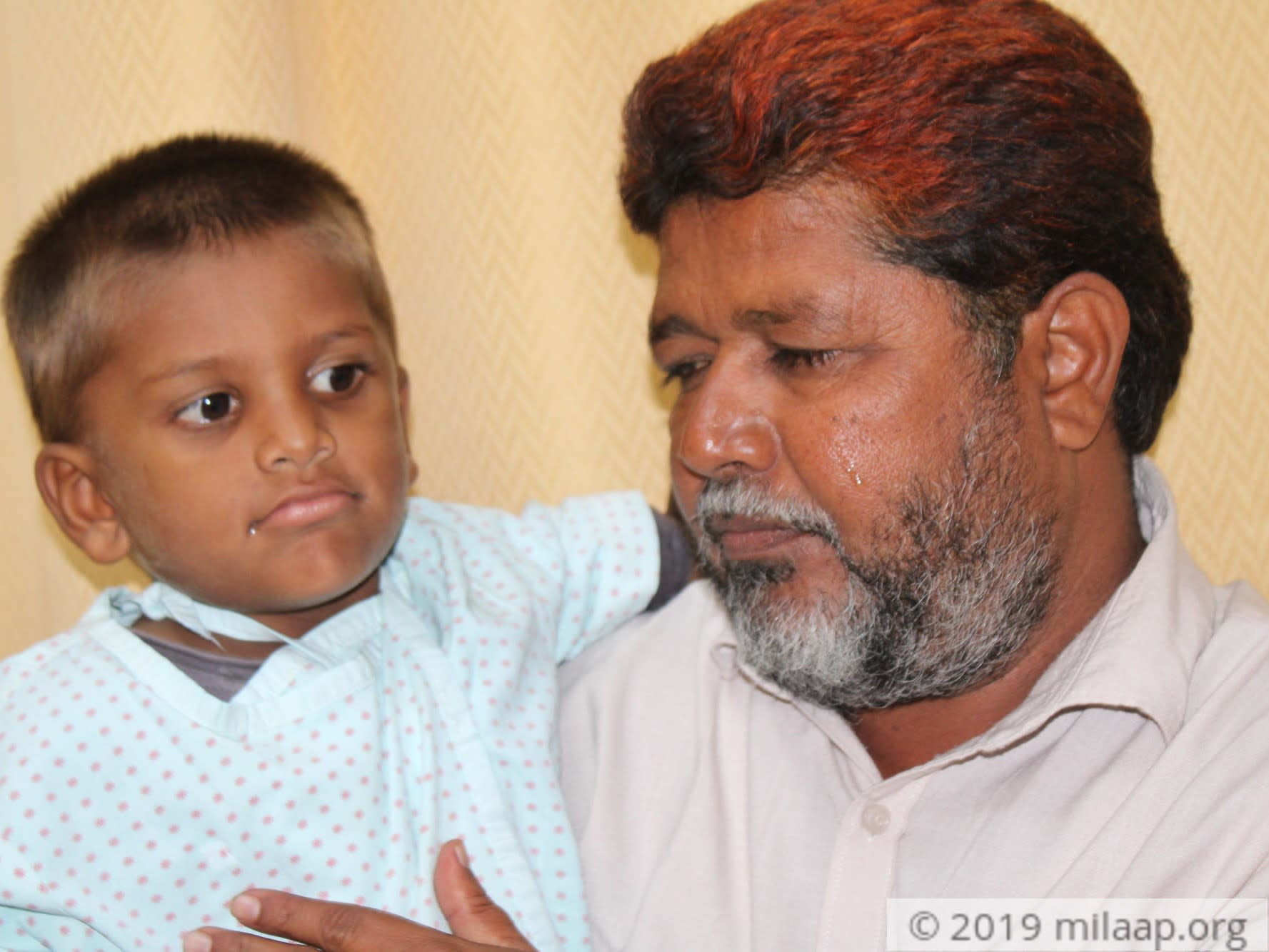 Share
I’ve gone everywhere they’ve told me to – Mumbai, Hyderabad, Chennai…I’ve tried every treatment they’ve asked me to – tablets, Ayurveda, injections, syrups. You name it, I’ve done it! But this disease is still killing my son. Every doctor, in every city, told me the same thing – only a bone marrow transplant can save his life.
But Mukhthar Ahmed, a milkman, can’t save his 4-year-old son on his own.

He cries every time he even sees an injection. Even after all these years, he's terrified of the pain.

No one believes that little Mufeez is ill

Mufeez’s illness isn’t just a fever, cough and cold, but a very rare and dangerous disease – pure red cell aplasia. His body can’t produce blood and every few weeks he becomes so weak that his skin turns extremely pale and weak.

“He’s different. He isn’t like the children in our neighbourhood. His skin, his hair…and even he notices that. He has never been to school because of his disease. Every day he sees children going to school, and he wants to go too. Maybe soon, I tell him. You know everyone asks me why I take him to the hospital. They think he looks healthy because he’s not extremely underweight. They don't know that the two days they see him playing is only a momentary thing…”

Mufeez was only 3-months-old when Mukhthar and Shamshad Begum were told he has this rare disease. He was 6-months-old when they were told that he needs a bone marrow transplant. He’s 4 now, it’s been all these years, but they still have no way to afford his treatment. Now, he’s running out of time.

If they delay his treatment any further, it will be too late

Mukhthar has lost count of how much he has spent in these 4 years. Even now, he spends over Rs. 3000 every month on Mufeez’s treatment. He wakes up at 4 am every day to deliver milk to houses in the area, the rest of the time he’s meeting people to see if anyone can help him save his son’s life.

“I have a family of 7 to look after. I’m the only earning member. I have done the best I can for him, but even that is not enough? I have delayed his treatment for so long because I couldn’t afford it…now if I delay it any further, it will be too late. I will lose my son. It’s a race against time now.”

Mukhthar now has no time to feel guilty or sad. He is doing everything he can to afford his son’s bone marrow transplant. Mufeez is oblivious to his father’s struggle, and to his own fight against death. Your contribution can save Mufeez’s life. His 4 year long suffering can end.
MA
Patient Mufeez Abdul Majeed is 4 years old, living in Bangalore
NH
Being treated by Dr. Nataraj in Narayana Hrudayalaya, Bommasandra, Bangalore