In Just A Week This 5-Month-Old's Organs Started Failing, He Needs Urgent Help To Live

“There are so many wires covering his little body. His face has become so swollen that we can't recognize him anymore. He hasn’t opened his eyes from the past 6 days. When I touch his body, he twitches a little – that is the only way I know that he is alive,”- Neha, mother.

Vris Ral and Neha’s 5-month-old baby boy, Manish, was conceived at home without any complications. The family lives in a small thatched hut in rural Jaipur and even though the baby was exposed to harsh weather from the beginning, he did not suffer from recurrent fevers or colds like other children in his neighborhood. However last week, he got fever that refused to subside with medicines. Vris Ral took him to many doctors who prescribed different medication, but none of it worked. And then on one day, the baby’s eyes rolled up and he lost consciousness.


“He was unresponsive for about 10 minutes before we rushed him to the emergency ward of a super-specialty hospital. The doctors said it was a miracle that he was still alive. They said he had a deadly infection and that his vital organs were shutting down one by one. From that day, we have not been eating or sleeping. All we do is pray for our son’s life,”- Vris Ral, father.

This poor street vendor needs your help to save his son

Vris Ral is a street vendor who sells medicinal oils and concoctions on a Jaipur street. He is so poor that he does not have the means to set up a proper shop for his items, and has put up a tent on the footpath instead. Business is not great and he earns just Rs 200 – Rs 400 on a good day; on bad days, he earns nothing at all. To get his son admitted in the hospital, he had to borrow more than Rs 1 lakh from all the other street vendors in his area who understood his plight. But this amount is just not enough to save his son.

“My son’s treatment will cost me nothing less than Rs 5 lakhs. Without it, he will not be able to survive. I have reached a point where I cannot pay for his daily medicines. I will be forced to discharge him from the hospital if no help arrives soon,”- Vris Ral.

With your kind help, these poor parents can save their baby’s life and take him back home happy and healthy 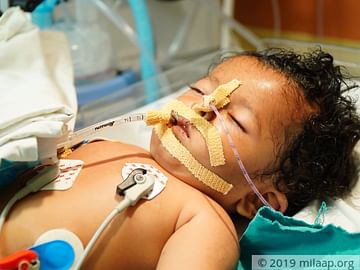 His Organs Are Shutting Down One By One

This 5-month-old will not survive without prolonged ICU care. Please support.