12-Year-Old With A Failing Heart Needs Surgery In Next Few Hours But His Parents Can't Afford It | Milaap
loans added to your basket
Total : 0
Pay Now

Shares
Shares
Share on whatsapp
12-year-old Jasim has only a few hours to get an urgent heart surgery without which he will not make it. His parents, Jawed and Nazreen, are desperate to save their son but they are in no condition to afford the surgery.

“My husband can’t even come and be with us during such a time of crisis. He is in the village trying to arrange money for Jasim’s treatment. I am alone in Kolkata praying to God for my son - that’s the only thing I can do now,” - Nazreen, mother.

An active and happy child, Jasim now is scared that he won’t live anymore

Jasim is suffering from scimitar syndrome - a rare congenital disorder that creates high blood pressure that affects the arteries in the lungs and in the heart. The only thing that can save his life right now is an open heart surgery that he needs in a few hours. He was a cheerful 12-year-old who loved playing football. But over the last few months, his condition became worse. His breathing trouble didn’t allow him to play his favourite game. He has been confined to his house, he also had to stop going to school - he has been too weak to even get up from his bed.


“I can’t hold back my tears when I see him lying down in the hospital scared that he might not live. Until October last year, we didn’t even know that he is suffering from such a severe heart condition. He used to fall sick and catch cold very often but never in our wildest dreams did we think that our son is suffering from a failing heart.”

Jasim with his cousin brother

Jawed struggles to feed his family, he can’t afford his son’s surgery without your help

Jawed works in others’ farms and makes around Rs 200 a day. Every day is a struggle for him and his family - they are not sure if they will get two square meals a day. It is almost impossible for Jawed to arrange the 2 lakhs needed for Jasim’s surgery. The only way he can save his son is with your kind contribution.

Nazreen and Jawed have nothing left with them with which they can afford their son's surgery. They are looking up to you for help, a small contribution from your side can save Jasim's life 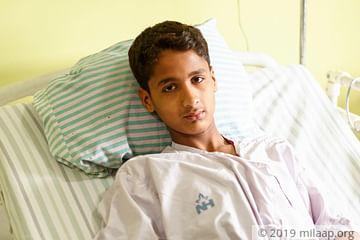 His Heart Condition Has Worsened In The Last Few Months, He Needs Urgent Help

His parents are too poor to afford the surgery, they need your help

UPI: givetojawed1@yesbankltd (Copy to clipboard)
Or
Click here to read the instructions before you make a bank transfer.