At 14, This Boy Still Has To Wear A Diaper Because Of A Rare Disease | Milaap
loans added to your basket
Total : 0
Pay Now

At 14, This Boy Still Has To Wear A Diaper Because Of A Rare Disease

“Finding out that your newborn has a birth-defect shocks any first-time mother. But when I was told the nature of my baby’s condition, I didn't understand it at first. When the doctors told me he needed surgery immediately, I just agreed to it blindly. I just wanted my baby to have a full and normal life.” – Sherina, mother

Baby Hashim was born with a defect in his bladder and rectum, that rendered him unable to fully control his bowel and urinary movements. That initial surgery was followed by 4 more, all before the boy turned 2. After being home-schooled for many years, he only started going to school at his parents’ insistence, wearing a diaper inside his trousers, and carrying 3 or more spares in his bag to change himself every few hours. But now his condition is killing him, he needs an urgent surgery.

“He would never leave the house because of how ashamed he was of himself. He was around 5, I think, when he first asked me ‘Why am I so disgusting, mummy? What is wrong with me?’ and it just… It broke my heart in a way I had never known before. I hugged him and told him there was nothing wrong with him, that it wasn’t his fault. I think, even to this day, he doesn’t believe that.” – Sherina

Young Hashim grew into a very shy boy, understandably. Where most children stop needing diapers at the age of 2 or so, Hashim never stopped. At the age of 14, he still needs them, to avoid soiling his clothes. As a child, he avoided going out and making friends as much as he could, not wanting people to look at him or pity him. He even avoided his own siblings, because he felt they were "normal" and he wasn't.

This family taught itself how to accept and manage young Hashim’s condition, but it is now killing him from inside.

Because of his inability to control his bowels, young Hashim has never been able to fully empty the waste from his body, and it has now solidified in his large intestine, causing severe abdominal swelling and  great pain. And because of his inability to control his urinary system effectively, his body could never close itself off from possible infections coming in through those openings. This has now started to damage his kidneys, permanently.

Young Hashim now needs an urgent surgery to help correct these problems and maybe, after 14 years of being ashamed of himself for something that isn’t his fault, he can finally discover happiness. But his parents cannot afford the cost of the treatment at all, coming from a really poor background. Hashim's father drives an auto rickshaw and earns about Rs 500 on good days. There is no way he can save his son without help.


“I never dared to think that treatment for him was a possibility, because I knew it would be expensive. But now if he doesn’t get the treatment, we’re not just preventing him from having a normal life, we’re risking his life entirely...” – Sherina, breaking down

With nobody else to turn to for support, this family is now depending on you. Donate whatever you can, and help save young Hashim’s life.

He already lost his childhood because of this ailment. Let him not lose his life as well. 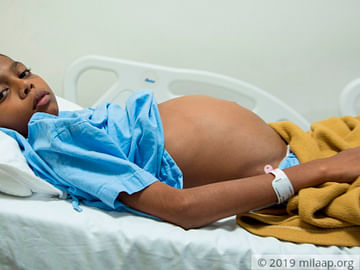 His parents gave him all the love they could

But he never loved himself, thinking of himself as "disgusting"