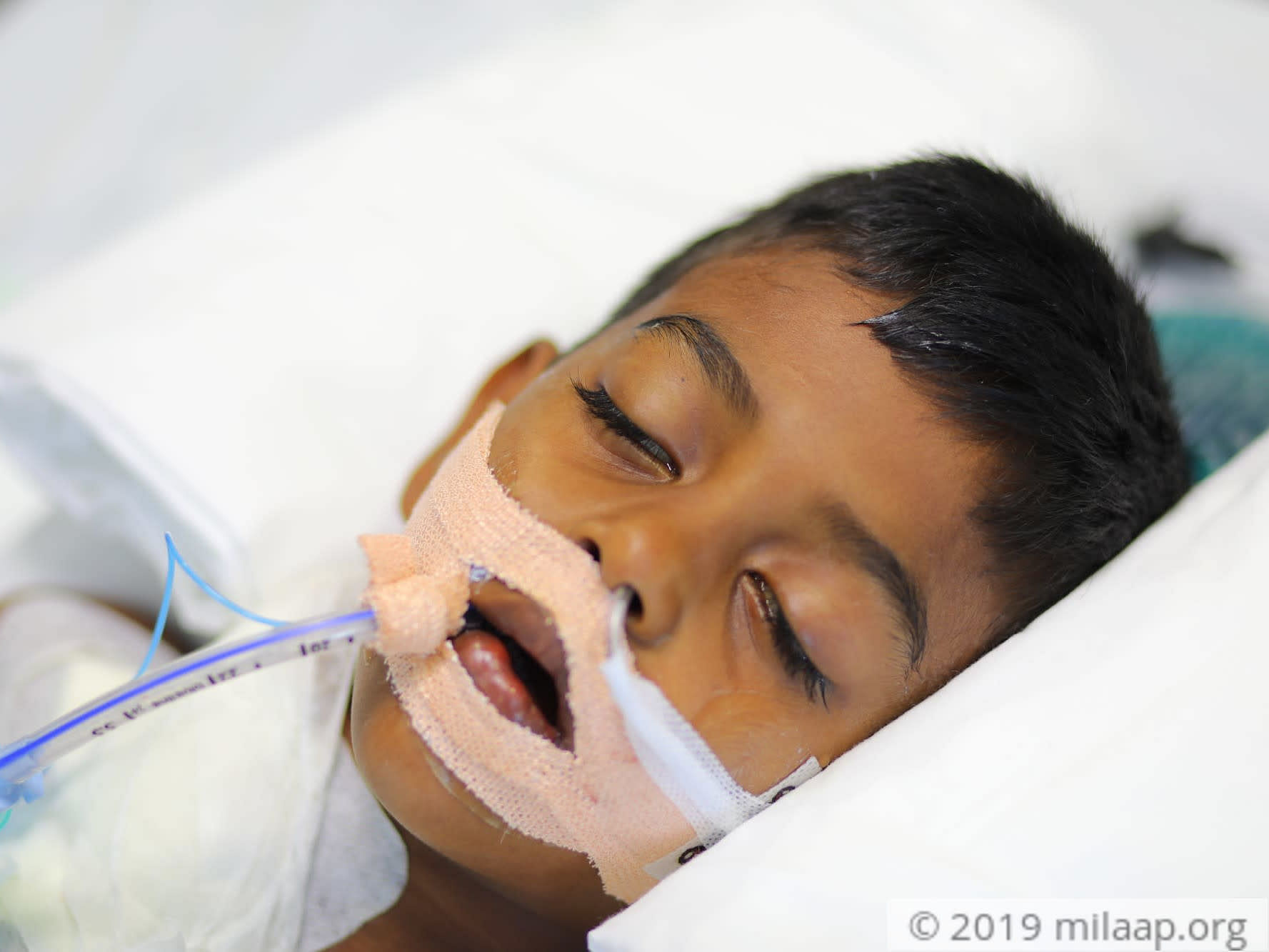 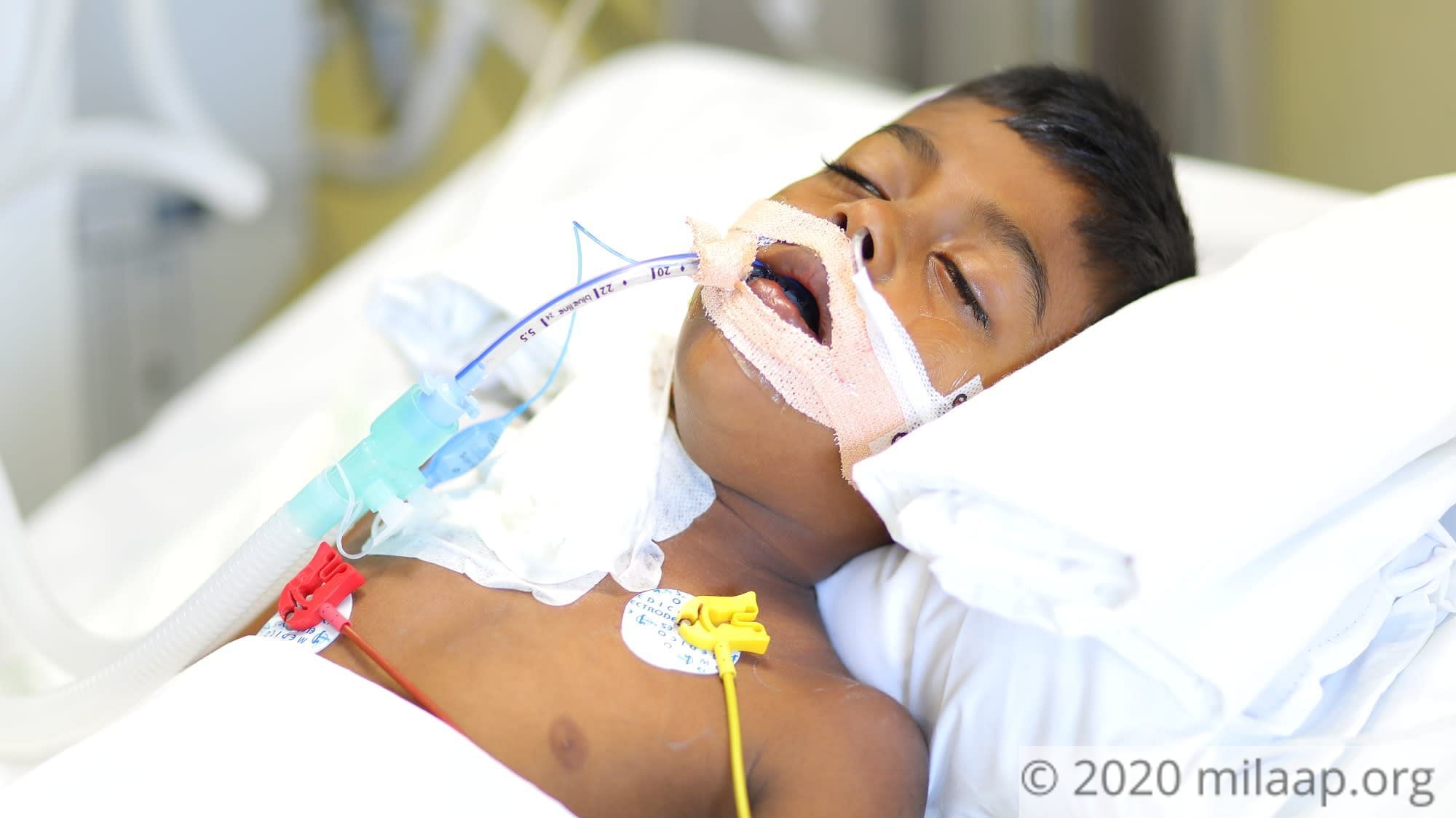 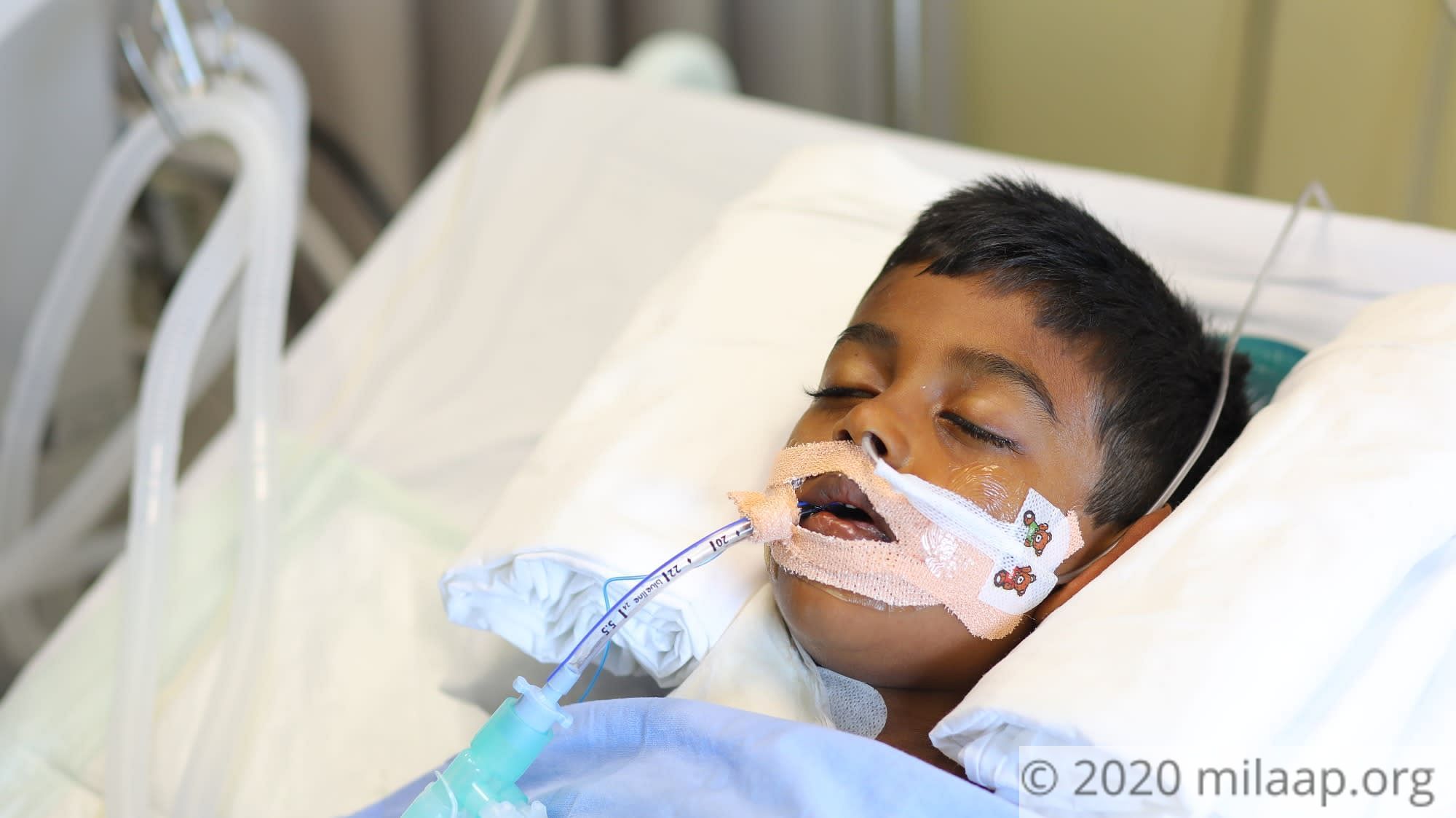 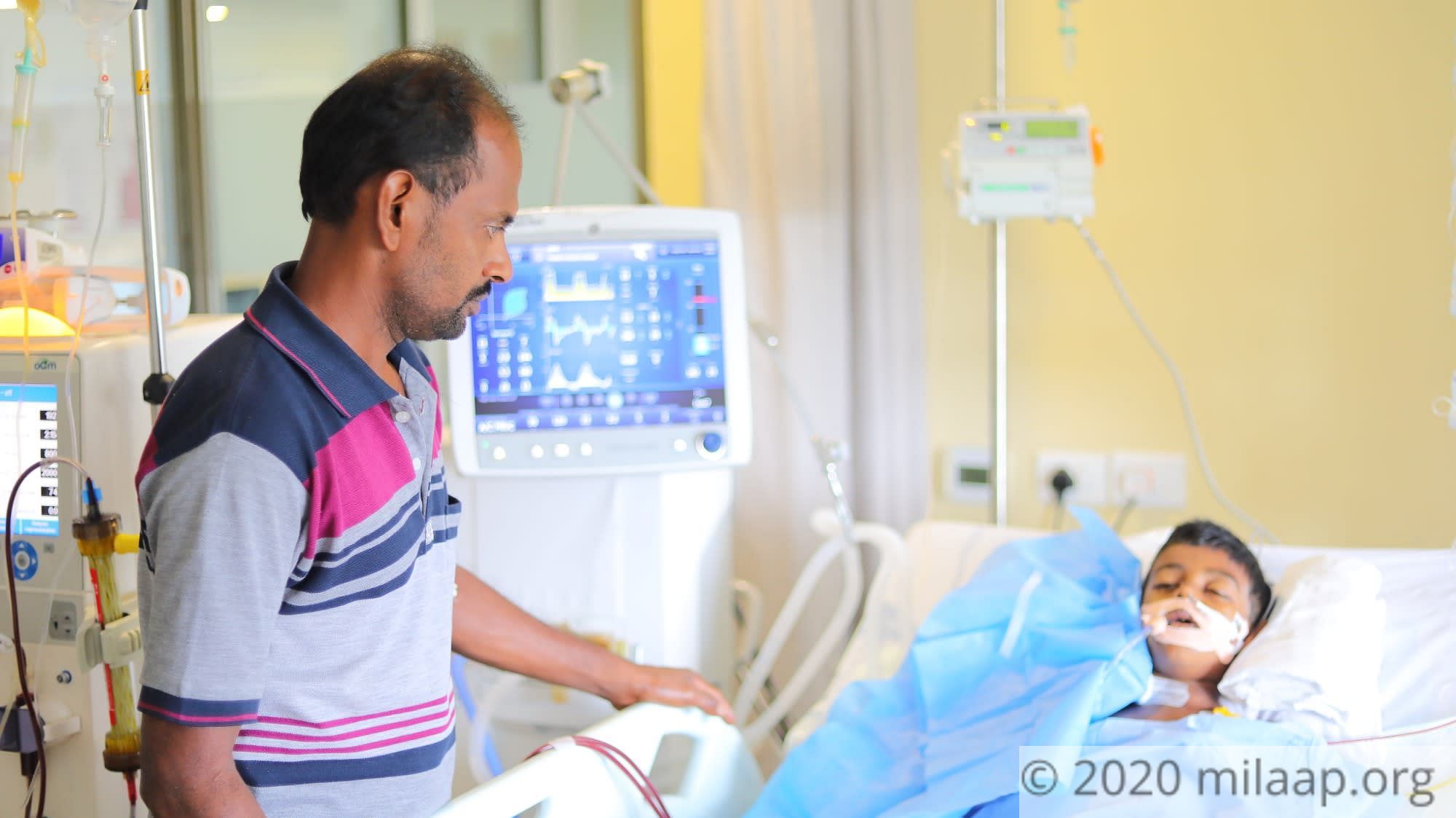 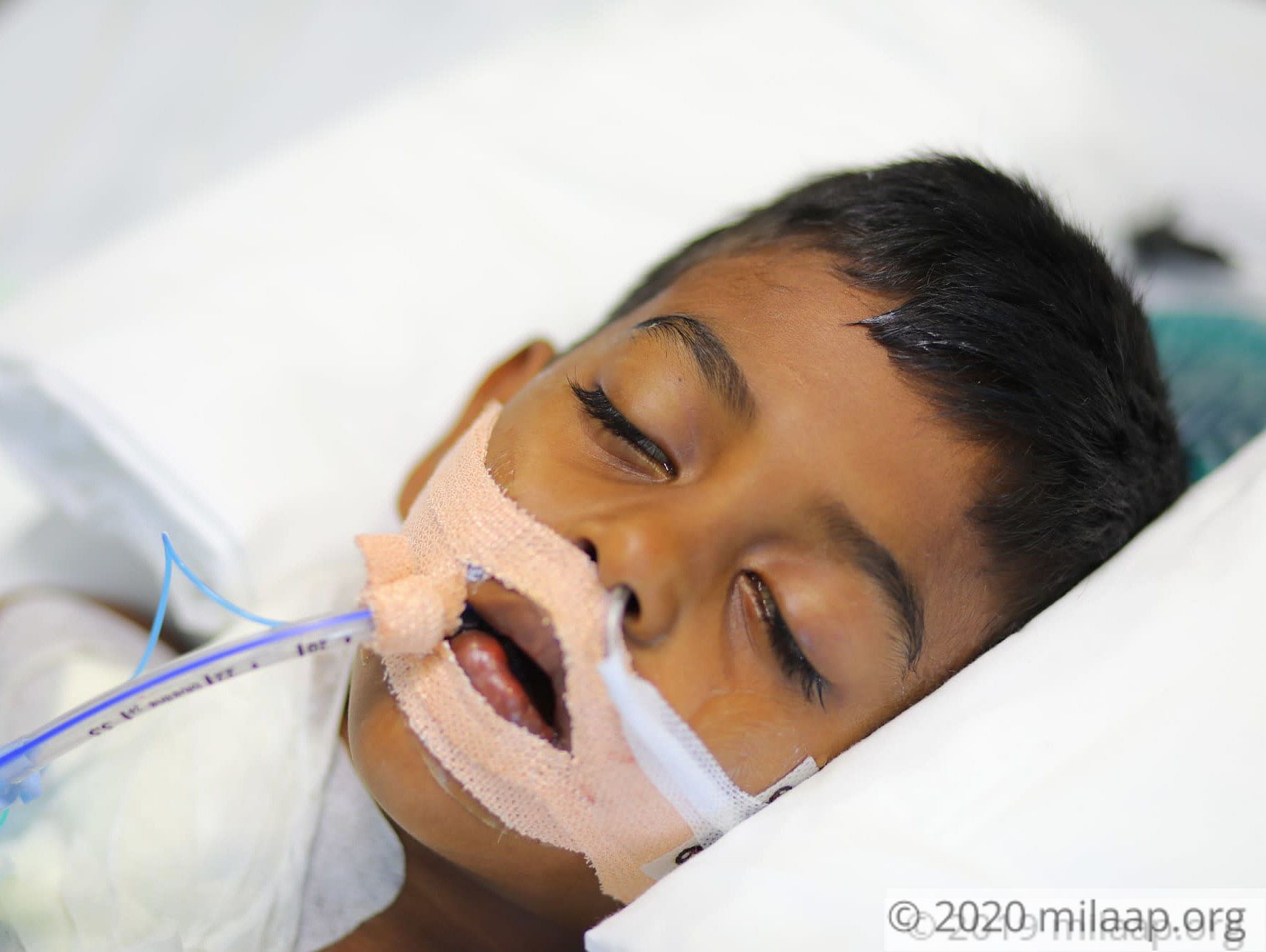 “I just cremated my wife 4 days ago. If my son doesn’t get a liver transplant, I will lose him too. Have you ever seen a loved one fight death? Two people I love the most were almost on their deathbed. I couldn’t save my wife, and now I have very little time to save my son. He’s in the ICU. Fighting, for no fault of his. He just thought he was eating ice cream…how could he have known that someone had mixed rat poison in it!” – Steven, father

Steven has had the most devastating and traumatizing week of this life. But he refuses to give up. At a time when he feels completely broken on the inside, he stays strong on the outside with only one aim – to save his 7-year-old son from death.

Steven, his wife, Shilpa and their two children lived a fairly normal life in their home in Mangalore. But their happy family started crumbling 5 months ago when Shilpa started getting suspicious phone calls.

“Shilpa was an orphan. She grew up in a hostel in Bangalore and the caretaker of the hostel started calling her 5 months ago. Ever since that happened, Shilpa was unusually happy. She would tell me every day that our lives will change. She said we will have a car, a house and lots of money soon! I told her to be careful. But she was very naïve and gullible. She should’ve been careful…”

Steven's wife, Shilpa when she was in the ICU

The family was being cheated

Shilpa soon realized that after months of telling her family that she’s getting money, she was being cheated. Shilpa was scared, she didn’t know how to tell her husband. She felt helpless and alone. On October 9th, Shilpa decided to buy ice cream for everyone at home. She kept her cup of ice cream in the freezer and told everyone not to eat it.

“She wasn’t as happy and excited as she had been. We were supposed to go to Bangalore the next day to meet the caretaker of the hostel, Shilpa had insisted that we go. As I was packing, Shilpa told me she wasn’t feeling well, she was vomiting a lot. She asked me to cancel our trip to Bangalore. At 1 am, our son Aston too fell sick. And that time I didn’t know that they had both consumed rat poison…”

The ice cream nearly killed Aston, but there is hope

Shilpa was rushed to the hospital the next morning. Aston too, was sick because he had eaten a little bit of the ice cream. But the doctors there treated him for food poisoning. Shilpa then confided in the doctor that she had mixed rat poison in the ice cream. Shilpa and Aston were rushed to a hospital in Kochi in an ambulance. Both very, very critical.

“A day after we came here, Shilpa passed away. All her organs failed. I couldn’t even understand the last sentence she said to me…now all I have is my son. I have to save him. His liver has failed completely. He needs the transplant…he’s running out of time.”

Steven is a farmer in Mangalore. He earns just enough to feed his family of four. After spending 6-7 lakhs already on his wife and son’s treatment, he has nothing left. He still hasn’t come to terms with everything that has happened. Even a single mention of Aston, makes him cry. Steven is helpless.

“She didn’t intend to kill herself…she definitely didn’t intend to hurt our son. She loves him…I’m sorry, she loved him. She wouldn’t do that. She was just scared…she should’ve just come to me..."

Aston is the closest to Steven. He wouldn’t do anything without his ‘dada’. The two were inseparable. But Aston hasn’t opened his eyes in a week and Steven is slowly losing his will. You are his only hope in this time of despair. You can help Steven save his 7-year-old son’s life. 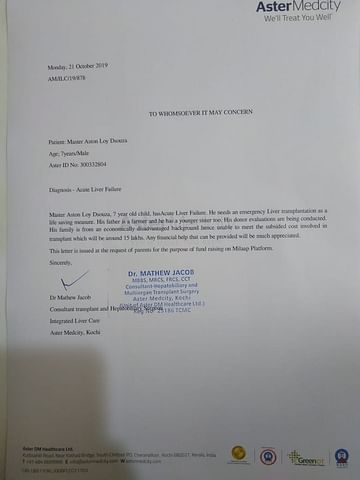 Please bless him with life

Donated to this campaign via Bank transfer/QR Code? Click here if you can’t find your donation listed below.
A
Anonymous donated £250

Please bless him with life