This 22-Year-Old Woke Up To Find Himself Paralyzed After A Tragic Accident | Milaap
loans added to your basket
Total : 0
Pay Now

Shares
Shares
Share on whatsapp
On 12th of august, Manish was travelling back with his friends in a van from a temple. Suddenly the van lost balance and they met with an accident. Everyone was immediately taken to the hospital and were out of danger except for Manish.
Manish was unconscious for two days and as soon as he opened his eyes, they were full of tears.

“He started crying looking at me. I cried too, a lot. He told me that, he never thought he would see us again but I had another fear in my mind, the fear of letting him know what has happened to his body.”- Tejiya,mother

I tried to move but realized I can't anymore

Due to the accident, Manish has suffered from head and traumatic spinal injury. His lower body is completely paralysed. He needs at least 3 months of hospital stay to fully recover.


“In one way I was very happy to be alive but soon when I tried to move my leg, I...I realized I can’t. I can’t even explain what all thoughts are running in my mind, all the things I like to do and won’t be able to do...everything starts haunting me at night and I am unable to sleep.” - Manish

“Looking at our financial condition, the hospital also reduced some amount but still it is too much for us. I hardly earn enough for my family of 5. 12 lakhs? Where will I get it from?”- Nathunisha, father. He is a mason in Bihar.

“When he opened his eyes, his father was not there and he was disappointed but what can we do. If he doesn’t go to work, we won't be able to afford even the daily medicine that he has to take for the pain. So he went back to Bihar.” -Tejiya

The family lives in Bihar. When Manish woke up after two days, they shifted him to Delhi for his further treatment in hope for better cure as his condition was serious. Manish will be 100% cured too but the only thing that stands in their way is the treatment cost which they are unable to bear.

We thank God each and every day that our son is alive with us today but the thought that he will not be able to walk or even move without help ever again without treatment is unbearable.

"My parents are getting old, I should be the one taking care of them and not the other way around. I don't want o be a burden on them, I want to get well at the earliest. But my poor father, he is struggling so much to arrange the money for my treatment. I feel guilty about having an accident." - Manish.

Manish had started working just after he passed out of school. He had saved up some of his hard-earned money to do some courses. He wanted to get a better job soon to help him - he worries if that will ever be possible now...

They need your help to take Manish home on his two feet, able to walk and able to take care of his old parents. Your kind help can save him from life long helplessness. 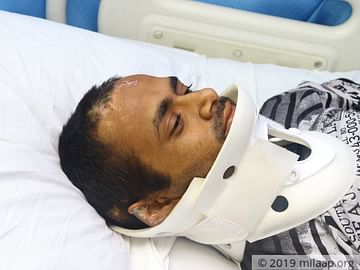 Manish met with an accident and you can help to get him back on his feet again.

UPI: givetomlpmanish3@yesbankltd (Copy to clipboard)
Or
Click here to read the instructions before you make a bank transfer.