This Baby Has Survived Against All Odds, Now He Needs Help To Fight Pneumonia | Milaap
loans added to your basket
Total : 0
Pay Now

This Baby Has Survived Against All Odds, Now He Needs Help To Fight Pneumonia

“They told us he won’t survive. He was just born and we already thought we would lose him. He was just 5 days old when he had his first surgery because he couldn’t drink anything, his food pipe hadn’t even developed. Our son made it through all that – premature birth, underdeveloped organs…he made it. But now fate has brought us to the same cross roads again.” - Jagadeesh, father

1 year since Jagadeesh and Meenakshi’s son was born, 1 year since his struggle began. Now little Mallikarjun is suffering from severe pneumonia. He has been in the ICU for days on oxygen support. In the 1 year that he has been alive, he has been through so much – he has been fed through a hole in his stomach all this while. This time, however, his parents have nothing to afford his treatment.

He begs his father to carry him, Jagadeesh can do nothing but cry

Jagadeesh can’t help but break down when you ask him about his only son. He remembers all the years they struggled to have a baby, the time they lost one baby and how they saw no hope after that. He’s a daily wager and has already spent lakhs on Mallikarjun’s treatment till now. All borrowed. Which means he’s in severe debt now.

“Almost 6 lakhs. It’s been 15 days since we’ve come to Bangalore…I have nothing to afford his treatment now. He needs to stay in the hospital longer. What if I can’t save my only child? I will never forgive myself. He begs for me to carry him..I'm helpless.”

Meenakshi and Jagadeesh need your help to take their only son home. 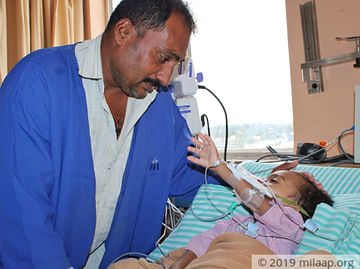 He Begs For His Father To Carry Him

Mallikarjun needs to stay in the hospital longer to recover from pneumonia.