13-Year-Old Likith Nearly Lost His Leg To Bone Cancer, And Now Might Lose His Life Without Treatment | Milaap
loans added to your basket
Total : 0
Pay Now

13-Year-Old Likith Nearly Lost His Leg To Bone Cancer, And Now Might Lose His Life Without Treatment

“Likith is very scared of all the needles and injections. Every day he asks me when the pain will end, but I don’t have an answer. I’ve seen my son suffer so much because of cancer in these past few months and there seems to be no respite for his pain,” says Likith's father, Somashekar.

13-year-old Likith has been in extreme pain because of a tumour in his left knee. He underwent chemotherapy and surgery, after which his condition began to improve. However, ever since his diagnosis, Likith has had countless sleepless nights. The pain of cancer and the fear of losing his life keeps him up at night. Likith’s only hope is to complete his chemotherapy treatment. He needs 3 more cycles to get better again.

The diagnosis that changed his life overnight

Six months ago, Likith came home complaining of pain in his left knee. He enjoyed playing football in school and would sometimes come home with a bruised knee or scratches on his legs. His father, Somashekar, thought it was one of those small wounds that would get better in no time. However, his pain only increased and in a few days, Likith found it difficult to move his leg.

“We then took him to a hospital in Mysore and got tests done. I was shocked when the doctors told us he had cancer. We thought it was only a regular knee pain. On some days, we still can’t believe that we’re at the risk of losing our son.”

Likith is a class 8 student. He is a favourite among his friends and teachers in school. However, he now sadly watches all his friends go to school, while he’s forced to be confined to his bed. Cancer has made the once spirited Likith weak and helpless. He’s afraid he might never be able to play his favourite sports ever again.

Likith’s diagnosis was devastating for the entire family, especially his mother who has been suffering from depression for 3 years now. The news of Likith’s cancer has only made her condition worse. She is distraught to see her son in so much pain. Somashekar is trying his best to care for his wife and child and is under immense stress.


“The news of his cancer broke my wife. She’s in denial about his disease and barely even talks anymore. I must take care of both of them now. My daughter is also very young and needs me around, but I’m helpless. I’m trying my best to balance everything. Sometimes,I feel like I’m failing, but I can’t break down or show my worry to my family. I keep praying that we will get past this soon.”

Somashekar owns 2 acres of land in his village near Hassan, which is the family’s only source of income. It’s been 6 months since Somashekar has been able to work on his farm. Somashekar is struggling to pay for Likith's hospital bills along with the medication for his wife.


“I have no income now. I’ve already spent 15 lakhs on his medical expenses. I’ve sold all the jewellery we had and was forced to sell a part of my land to pay for his surgery. I haven’t been able to go to work because I must stay with Likith during his treatment. I have nothing left. I feel powerless.”

Likith needs to start chemotherapy at the earliest to survive. He has been bravely fighting bone cancer for over 6 months now and underwent chemotherapy and surgery. Even though the medical expenses were beyond his reach, Somashekar didn’t give up on his son. He sold his land and jewellery to pay for his treatment, but now he's left with nothing. Likith needs 3 lakhs for 3 more cycles of chemotherapy. Without treatment, Likith might not make it.

Likith nearly lost his leg. With your support, he can keep his life. 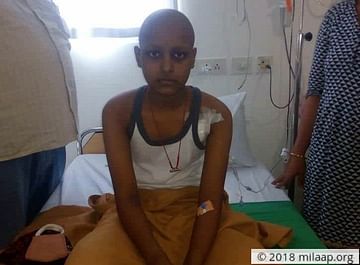 Likith needs chemotherapy to beat cancer before its too late. You can save him.