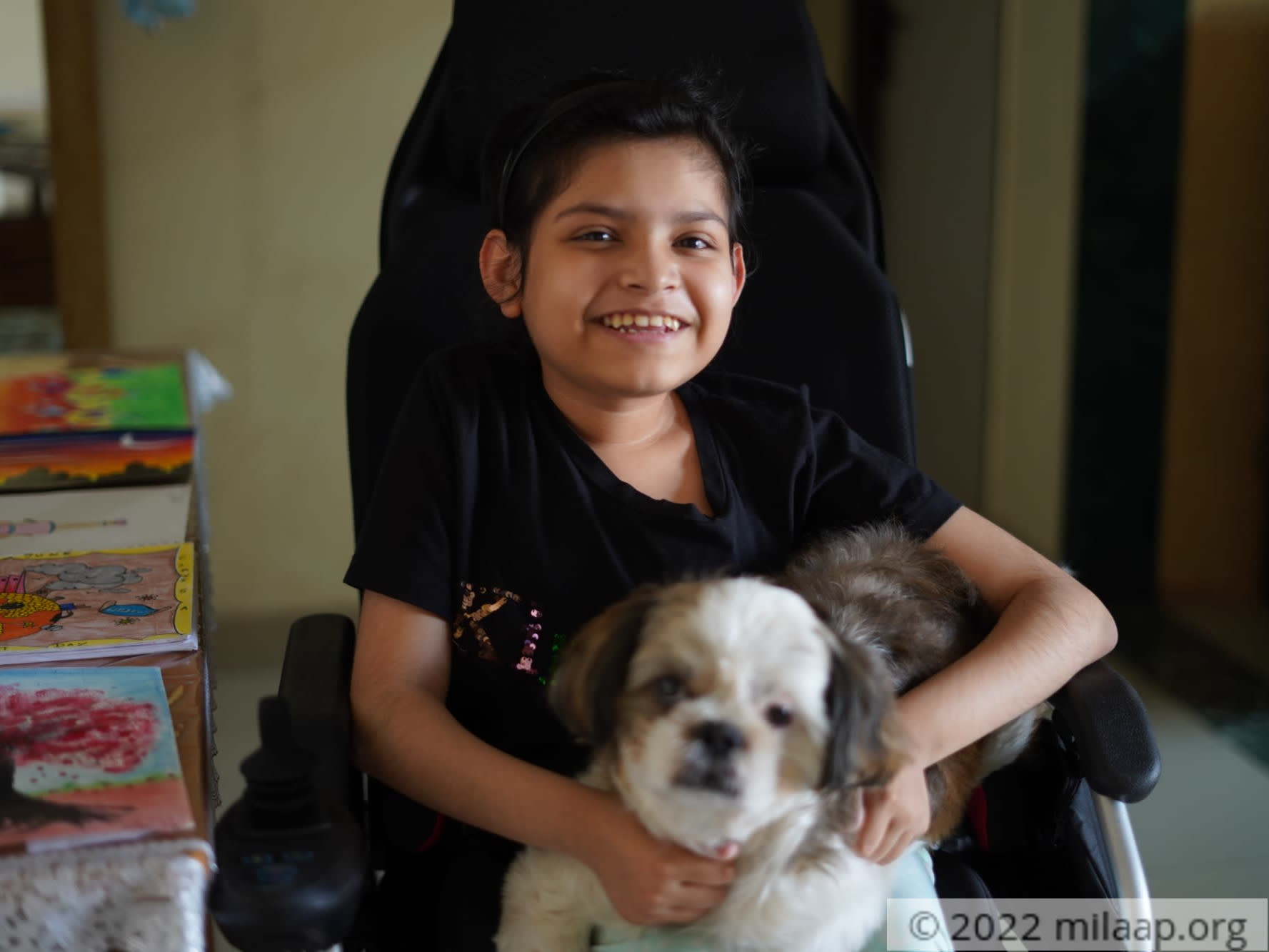 “The reports said - spinal muscular atrophy, and I had no idea what it meant. So I paced the hospital floors for hours, anxiously waiting for the doctor to give me some clarity - and when he did, I went into a state of shock. I was told that my baby was suffering from a rare, terminal, neuromuscular genetic disorder, and that I would be lucky if she lived past her second birthday, as there is no cure. I couldn’t express my devastation, so I remained strong and kept moving ahead.” - Monisha, mother

Following a complicated birth, her health deteriorated and resulted in a shocking diagnosis

Little Keya's arrival, in December 2010, was the perfect Christmas gift for her parents. Although she’d had a normal delivery, it wasn’t easy for Monisha, who had had a complicated pregnancy that not only took a toll on her, but also her baby. Keya was born slightly premature, with the umbilical cord wrapped around her neck and a very low birth weight.


Following her brother’s passing in a freak accident, Monisha had been visiting her hometown, when she first took notice of Keya’s sluggish movements. Her 8-month-old, who had been crawling perfectly well until then, was now struggling to even lift her neck. On returning to Bombay, where they lived at the time, she wasted no time and consulted several doctors.

“One recommended physiotherapy, which yielded no positive results even after a month. Another suggested thorough check-ups and tests, which were also in vain as the reports didn’t detect any abnormalities; though Keya was beginning to grow visibly weaker. Finally, we were advised to take her to a hospital in Delhi that specialised in gene-testing, where we found out about her SMA.” - Monisha

Whilst taking care of her daughter and working a full-time job, she became a single mother

Ever since her husband had lost his job to the recession, Monisha had taken over the reins as the breadwinner, while he looked after their 2 children. The couple had worked equally hard to come as far as they had in life. But when Keya was diagnosed in 2011, they were forced to come to a trade-off and her father set his career aside.

“The next three years were extremely difficult. It was very challenging for my husband, who stayed home all day, and I could see the mental toll this was taking on him. We would bicker often and my in-laws constantly expressed their discontent. My marriage, which had been on the rocks, gradually fell apart. Meanwhile, Keya’s condition deteriorated. She became very sick and weak, and I resigned from my job to stay by her side.” - Monisha

Contrary to the doctor’s words, Keya went against all odds and has made it to her eleventh year of life. Her family worked around how to live with Keya’s SMA, and her mother learned from her doctors and through some research that by working on Keya’s immunity and with physiotherapy, the disease could be slowed down. They moved to their hometown, Visakhapatnam, where she was able to enrol in school. Keya hasn’t been able to walk since birth, but has been managing quite well with prosthetic braces. So, she was schooled with help from a shadow maid and she did really well, as she has always been a bright child and a quick learner.

Keya has been holed up at home without proper medical attention for 2 years now, because of the pandemic. Her muscular weakness has grown and her spine has developed severe Kyphoscoliosis, an abnormal curvature of the spine. She also has a dislocated hip, frozen knees and hips, kidney stones and suffers from osteoporosis as well as obstructive lung disease.

“It has been anything but easy. Keya has grown up well in spite of her SMA and has a knack for creativity. She aces her academics, sings, dances and paints. Fortunately, Keya has a good chance of recovery with the right treatment - a drug called RISDIPLAM can give her a new lease of life. But, the cost of her surgery and this drug together is way too high for me to bear.” - Monisha

Keya needs 30 oral doses of RISDIPLAM; nutritional support to increase bone strength; BiPAP support to increase lung function; and multiple hip, knee and spine surgeries, along with physical rehabilitation which will cost nearly INR 1.5 crores. But with no source of income and having exhausted every single rupee she had, Monisha has no way to make this expensive treatment available to her daughter.

With a little help and support from you, Keya will soon be able to beat SMA. Your contribution can add a few more years to Keya’s life. Click here to donate.
KH
Patient Keya Hatkar is 11 years old, living in Visakhapatnam, Andhra Pradesh
SC
Being treated in SRCC Children's Hospital, Mumbai