5-Year-Old Needs Chemo To Beat Cancer And Go Back Home To His Brother | Milaap
loans added to your basket
Total : 0
Pay Now

“Sai adores his Anna. It is only because of his eagerness to reunite with his brother that Sai takes his medicines on time. Even though his brother is elder to him, Sai will not sit still and fearlessly go and confront anyone who hurts Chandu. He loves his Anna so much that when we scold Chandu, Sai will scold us back. Even now if we take Sai to play in the hospital area, instead of getting excited to see the fancy toys he has never seen in his life, he gets upset because Chandu is not here to play with him.” - Kamala, mother.

The helpless parents had to leave their elder son at Kamala's mother-in-law's place because even the flight tickets to get him from Andaman to Kolkata is something they cannot afford now. His son is in need of an urgent chemotherapy but the poor father doesn't have the money to afford it.

Sai is such a lovable boy that no one can forget him once they meet him. He gets along with everyone and can talk to them for hours. He is like the gang leader among his friends. But this time, the little boy noticed something different when he came back home from the hospital.

"I had come to gather funds again for Sai's cancer treatment. I noticed that they were avoiding us. They did not let their kids play with Sai. They thought being around a sick child will make their kids also unwell. I can't blame them, I would have been scared too.  But even in this crisis, they have been very generous to help me out with whatever they have. But, unfortunately, it's not enough..." - Gangadhar sounding very anxious.

When Sai was born, his parents noticed a little bulge in his stomach. They did consult the local doctor to check if something was wrong but he just gave him medicines for gastric issues. In 2018, Sai had mumps and he had to be immediately hospitalised.


"That is when the doctors asked us if we knew that our son had a liver problem. But that was not it - his reports revealed that he has cancer! They kept him under observation for 15 days. Those were the longest 15 days of my life. I couldn't believe that something as dangerous as a cancer is growing inside him,"- Kamala, mother

Little Sai comes from a small village in Andaman where treatment for a disease like blood cancer is not available. Even though he got detected with it, the wait for medicines to reach their remote village for more than a month had deteriorated his health. His cancer started spreading all over. With no proper health care facilities and some monetary help from their relatives, they managed to get Sai to Chennai for treatment.

The doctors had given up hope on the little boy but the parents were determined to save him. They brought him to Chennai and then Kolkata.

A love marriage, two little boys Gangadhar and Kamala's life seemed perfect. That was till they knew about Sai's cancer. Gangadhar works at a fast food stall and makes just about enough to run his family. For the last 5 months, he hasn't been able to go to work - the money that he had borrowed is also getting over fast.


"I had borrowed 4 lakhs from my relatives and friends. But everything got over only on chemotherapy and injections. We still need 4 more lakhs to save Sai. Our relatives tell us to give up our hopes on Sai because we already have another child. They feel it is useless to spend more money on his treatment. But Sai is like our heartbeat, if something happens to him, it is we who will die. Even if there is a 1 percent chance that my kid will survive I will give up anything to take that chance." - Gangadhar.

"He is just 5 years old but he is the one who takes care of us all. Will our family ever be the same if something happens to Sai? Never….” - Gangadhar, father 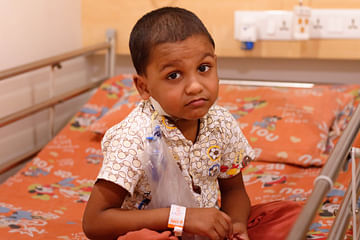 He needs continued chemotherapy, his parents need your help to save him