“For 20 years, we struggled hard to have a baby. We never thought we’ll ever have children in this life. But John is our miracle baby. He brought back the happiness into our lives again that we lost 20 years ago. But now he’s in the ICU for the past 5 days because of his failing liver. The doctors told he has only few hours left to undergo liver transplant otherwise we’ll lose him forever.” - Mounika as she sheds tears

John is all Mounika and Suri Babu ever dreamed for. Their own relatives who once used to mock them for not having children, came together to rejoice when he was born. It gave them immense joy as they watched their little one take his first steps and call them ‘Amma’ and ‘Nanna’. The always made sure John gets his vaccines on time and that he eats healthy food. But 20 days back, things started changing and John’s health started deteriorating.


"I knew when his eyes turned yellow, that he had jaundice. We took him to a local doctor. He said it was normal for infants to get jaundice. The normal medicines should have helped him recover. But it didn’t. He was admitted to the ICU. 5 days ago, we were told his liver is failing. I didn’t know what to do. I didn’t know what to say. I just broke down into tears.” - Mounika, mother

He’s losing his consciousness, without a transplant he’ll lose his life

As she consoles her crying baby, Mounika pleads Suri Babu to save him at any cost. Their baby who was once happy is now spending sleepless nights, continuously crying. Suri Babu is trying everything he can to keep him alive, but the liver transplant is just beyond his reach. Suri Babu works as an agent in Sahara India and he hasn’t been getting salary for the past 1 year due to a case filed against the company.


“He never had any health issues and now his liver is failing. We are still unable to understand what went wrong. John is slowly losing his consciousness now. He’s drowsy and sleeps all the time. We can only save him with liver transplant but after everything we’ve spent for his treatment we don’t know how to arrange money for his transplant.” - Suri Babu, father

Suri Babu spent Rs 3.5 Lakhs in just 10 days for John’s treatment by borrowing from his friends and mortgaging his wife’s jewellery. Left with no other option, he has come to seek your help through this fundraiser.

“We have already lost 20 years of our life to have a baby and now that we had one, we cannot let him die in pain. We had done everything that we could do and left with nothing but hope on crowdfunding.” - Suri Babu, father

For Suri Babu and Mounika, losing John means losing their only hope. They have already spent 20 years of their lives pining for a kid of their own, now if they lose John, they will never forgive themselves for being unable to save him.

Your help can save their miracle baby's life. 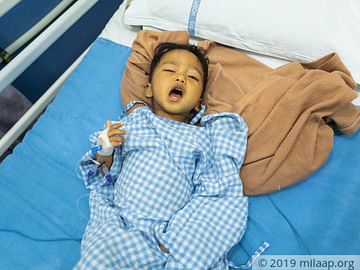 For 20 years they struggled to have John, now they're struggling to keep him alive

UPI: rzpy.givetomlpjohnanis002@hdfcbank (Copy to clipboard)
Or
Click here to read the instructions before you make a bank transfer.