10-Year-Old Is Determined To Fight Back Cancer But Her Parents Can't Afford the Treatment | Milaap
loans added to your basket
Total : 0
Pay Now

R
You are sending a message to
Ramya
Go back

Shares
Shares
Share on whatsapp
Durgavati can’t control her tears any longer. She is very scared for her 10-year-old daughter, Jigyasa, who is fighting cancer for the second time now. She needs chemo and a transplant but Durgavati knows that she won’t be able to afford the treatment. So while Jigyasa consoles her and tells her that she will be fine, Durgavati just holds her and cries silently.

We thought the nightmare was over, but we were wrong

It was in March when the family found out that Jigyasa has cancer. The swelling in her neck that had been bothering her for the past few months was one of the first symptoms of this dangerous disease.

“We had gone to so many doctors but in March when the swelling worsened she couldn’t even move her neck. Plus, there was the vomiting. We were scared, obviously, but not once did it cross our mind that this can be cancer,” - Durgavati, mother.

The family was shattered when they were told that she has cancer. But they were not ready to give up. They did everything in their power to afford Jigyasa’s treatment. She got well too - or at least so her family thought. But in February this year, the swelling, the pain - everything came back. The test results confirmed their worst fears, Jigyasa’s cancer was back.

Jigyasa has 2 elder sisters and 1 elder brother. Her eldest sister has been a patient of clinical depression for a long time, she hardly gets up from her bed and very recently, the other sister was diagnosed with jaundice. Her brother, Anurag, is the only one with Durgavati in the hospital.


“My husband is a heart patient, he needs a bypass surgery as soon as possible. But where is the money? He says he is fine but I know he is not. He was here with us for a month but then he got very sick, he couldn’t take the tension. Now he is at home, taking care of our other daughters,” - Durgavati.

She reads about her treatment, she talks to the doctors - Jigyasa wants to get better

In spite of seeing her mother cry, Jigyasa hasn’t lost hope. She reads up about her treatment on Google. She has so many questions for the doctors - she wants to know when she will be able to go back to school.

“She has been so brave all this while. She says she will be fine soon. I hope that same but she needs the chemotherapy and a transplant. It would cost us some 5 lakhs. We have already spent so much - over 2 lakhs.  Without help, we can never arrange for so much money.”

She is only 10 but is fighting cancer again. Her parents have nothing left to save her, you're their only hope. A generous contribution can bring back their lost happiness 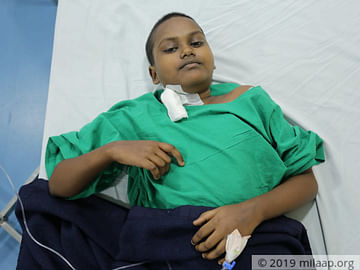 It Seems Like An Unending Nightmare To Them, Jigyasa Needs Help

Now only chemotherapy and a transplant can save her life