A Truck Crushed This Man’s Legs In A Terrible Accident, He Needs Help To Get Surgery In 7 Days | Milaap
loans added to your basket
Total : 0
Pay Now

A Truck Crushed This Man’s Legs In A Terrible Accident, He Needs Help To Get Surgery In 7 Days

“They had to amputate his left foot a few days ago. My son hasn’t spoken since then, the trauma is just too much for him. I know he worries about how he will go back to work, or how he will take care of us because we’re getting older, but all I want is for him to live,” – Basanthi, mother

It’s been 20 days since Jeetendra’s (26) gruesome accident has left him bedridden. His mother, Basanthi, hasn’t left his side at the hospital. Watching her once active and healthy son, struggle to even sit up without help has left her shattered.

Jeetendra was the pillion rider on the bike that his friend was riding on the fateful day of the accident. Another bike on the road hit theirs while overtaking, and Jeetendra was thrown off the bike. Just then a truck coming their way ran over his legs. It all happened so quickly - in seconds, Jeetendra was lying on the road bleeding profusely.


“I got a frantic call from his friend. All he said is that Jeetu is being taken to the hospital in an ambulance. We didn’t know how serious his condition was until we reached. He was on his way to a program held for Ram Navami, he said he would be back at night… now I worry if he’ll ever come home.”

He has already had 2 surgeries till now, the third one is beyond his parents' means

Jeetendra has undergone two surgeries for his legs till now. He needs one more surgery for his right leg in 7 days. Yesterday, due to the spreading infection, Jeetendra was taken to the ICU. His condition will worsen without the surgery and he might never be able to walk again. Unfortunately, his parents can’t afford his third surgery.

Jeetendra quit his studies to support his poor family, they have nothing to save him

Jeetendra’s father, Pahali, is a barber in their village near Angul, Odisha. He hardly earns Rs. 150 per day. They have always struggled to make ends meet, and as the oldest of the two brothers, Jeetendra had to quit his studies after class 10. He has been working ever since then. Before the tragic accident, he worked in a mill in Chennai for Rs. 4,000 per month.

“He had come home for the festival, I was so happy he was back. I hadn’t seen him in months. He works so hard that I don’t get to talk to him much. This was supposed to be a happy day for us.” - Basanthi

Pahali had to go back to their village to work. Basanthi is in the hospital with her younger son, taking care of Jeetendra. They have borrowed a few lakhs from family to start his treatment. They have nothing left to afford his third surgery.

Jeetendra is a responsible young man, who was taking care of his family of 4. The tragic accident has left him bedridden. He needs surgery in 7 days to be able to walk again.

The specifics of this case have been verified by the medical team at the concerned hospital. For any clarification on the treatment or associated costs, contact the campaign organizer or the medical team.
Click here to save Jeetendra
Donate 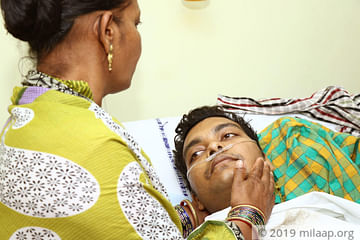 Jeetendra is in severe pain after the tragic accident. He needs a surgery in 7 days.

UPI: givetoprashanthkumar1@yesbankltd (Copy to clipboard)
Or
Click here to read the instructions before you make a bank transfer.