Javeed, Father of Four Children is Fighting Cancer, He Needs a Bone Marrow Transplant to Survive

Shares
Shares
Share on whatsapp
55-year-old Mohamad Javeed father of four children has blood cancer and the family is devastated. The only treatment for him to survive is bone marrow transplant to survive and unfortunately, the family cannot afford it.

They thought he had dengue but the diagnosis much worse

A month before Javeed had a terrible fever so his brother Sajid took him to the hospital. They were told that it was dengue and Javeed was given treatment for it. But his condition deteriorated and he started bleeding from his mouth. It was then that a bone marrow test was taken and the family learnt that Javeed had something more deadly - cancer.

Sajid was shocked to hear this. He did not know how he would tell this to his brother and his family. He told them that Javeed had TB and he needed treatment for a few more days. It was only when Javeed was given the first cycle of chemotherapy did a nurse tell him what was really wrong with him.

When Javeed first heard this, he had a moment of blind panic. He started crying and asked for his wife and children. All he could think about was - who would take care of them. His entire family that was present at the hospital broke down in tears. Sajid had to gather strength and console the family.

“It is the worst moment of my life and I never imagined I had to face something like this. Javeed is my eldest brother, he has spent whole life in taking care of us. It is painful to see him in such a situation. I’m willing to do anything to save my brother” says Sajid.

He needs a bone marrow transplant to survive

Javeed’s wife is now taking care of him in the hospital and his children are with Sajid. Javeed has completed the first cycle of chemotherapy and he needs to have 2 more cycles of chemotherapy followed by a bone marrow transplant to survive. His children are worried and they keep asking about him. Their life has just turned upside down and no one can imagine life without Javeed.

“I’m not scared of death, but I’m worried about the future of my children and wife , It’ll be unfair of me to just abandon them now. They haven’t even completed their studies, I need to live for them. I want to see them growing and living a happy life,” says Javeed.

Javeed with his wife and children

So far, treatment was managed by Sajid and Javeed's own savings. They have spent around Rs 3 lakhs so far. But the expenses are mounting. Javeed ran a small shop where he sold seat covers for the car. He earned Rs 7,000 on an average per month. He has absolutely no source of income now. He needs a bone marrow transplant to survive and it will cost Rs 20 lakhs which is beyond the family's means. Only your contributions can help him.
Supporting Document
specifics of this campaign have been verified with the concerned hospital. For more details, please contact the campaign organizer or the hospital. 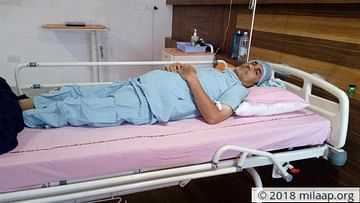 Javeed needs a bone marrow transplant at the earliest, but his family cannot afford the treatment.