2-Year-Old With Cancer Doesn’t Know A Life Beyond His Home And The Hospital, Needs Urgent Help | Milaap
loans added to your basket
Total : 0
Pay Now

2-Year-Old With Cancer Doesn’t Know A Life Beyond His Home And The Hospital, Needs Urgent Help

Shares
Shares
Share on whatsapp
2 years is an age where a growing child takes his first steps towards making sense of the sights, smells, textures and sounds around him. It is a time where physical development is at its peak – where the child learns to explore the outdoors and run, jump, kick etc in playgrounds with other children. But despite being a little over 2, little Issan cannot do any of these now as he is battling blood cancer. Instead of exploring the outdoors, he is restricted to a life indoors – more specifically, his home and the hospital as he is at a great risk of contracting infection that can even prove fatal without proper care.


“When he hears the sound of vehicles on the roads, he gets excited. He peers over the window, points to them and says ‘Car, car’. He wants to go outside. We try to distract him with toys, but he keeps staring out of the window and even throws a tantrum sometimes. Like him, even we are tired of being crammed up indoors, but what choice do we have? His life is more important to us,”-Dipankar Hazarika, father.

The family in happier times

Issan, the only child of Dipankar and Sumonjita from Guwahati, Assam, was growing up to be a healthy baby until he got recurrent fever and cough last April. After his eyes turned bloodshot, his parents became very worried and took him to a doctor who then diagnosed him with blood cancer. As they wanted him to get the best care, the family set out to Chennai for treatment. From the past two months, Issan has been undergoing chemotherapy in a good hospital in Chennai. But Issan’s is no ordinary case; he needs specialized medicines to protect him against even small infections and his parents cannot let them out of their sight even for a minute.


“Every day after bath, we need to apply a special ointment all over his body. Every corner of the house needs to be dust-free. His bedsheets need to be changed every day. We cannot let him put toys or even a strand of cloth in his mouth as it can kill him. As he does not sleep very well and is always irritable, my wife and I take turns to watch him, often without sleep,”-Dipankar.

Dipankar is a primary school teacher in Guwahati, working on contractual basis. He earned just enough to meet the basic needs of his wife, son and aged mother. After his son Issan was diagnosed with cancer, he had to make the difficult decision of leaving his job behind and move to Chennai – a city that was completely strange and unknown to them. He just had one aim in mind – to save his son at any cost. Issan needs prolonged chemotherapy for 3 years to survive. Dipankar already sold the only piece of land he owned to fund the treatment expenses till now and is left with nothing.


“I don’t even know if I still have my job. I have already spent everything I had. His expenses come up to Rs 4,000 every day (including his special medication). How will I be able to afford this and also feed him? Please help him,”-Dipankar

With your kind contribution, these parents can save their only child before his condition worsens 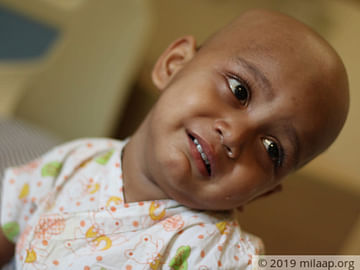 He Longs To Go Outside, But His Condition Will Never Let Him

UPI: givetodipankarhazarika1@yesbankltd (Copy to clipboard)
Or
Click here to read the instructions before you make a bank transfer.