Shares
Shares
Share on whatsapp
Hemanth is a 17-year-old who needs an urgent liver transplant to live. He is at the end-stage of chronic liver disease. His father is no more and his mother Radha cannot afford her son's treatment. The family has been spending on his treatment for years, even selling off their small farm. The transplant is Radha's last hope for saving her son.

Hemanth was diagnosed at age 5

From when he was just 5-years-old, Radha and her husband Nagraj knew Hemanth needed surgery to live. But they never had the money for such an expensive operation. Instead, Radha regularly took him to the local clinic in Pamidi – a village near Anantapur. She also took Hemanth to hospitals in  Kurnool and Bellary where she had some family.
Hemanth when he was 5-years-old
The family was scared of getting their child 'operated'. They reasoned they were poor people who didn't have any money any way. Nagraj was a day-worker in fields and Radha was a tailor. They barely made ends meet as it is.

“I don't remember how much we have spent on his treatment. Sometimes, we spent a few hundreds, sometimes thousands and even lakhs. We sold off our 2-acre family land for his treatment. We knew we couldn't get a surgery so we spent as much as we needed to keep him healthy,” she explains.

Relatives saw Hemanth suffer. He would turn yellow and be unable to eat or move. They helped out. They made sure Hemanth could go to the hospital. This is how Hemanth spent the last 12 years. Going to school, playing and helping his mother on the good days. Sick and bedridden on the bad days.
Radha with Hemanth in their village

Poverty made Radha give up on saving her son

Nagraj died of chronic alcoholism a few years back. Radha brought up her children and fed the family with her tailoring business. Every time Hemanth fell ill, she keenly felt that a bit more money would get better treatment for her son. Because it was not within her means, she gave up on saving her son.
But in December 2015, Hemanth had a very serious attack of jaundice. Radha knew that without help, Hemanth would not make it. She rushed him to the local doctor, who had been treating Hemanth for over 10 years.

“Even though he is retired, I went to our doctor in Pamidi. I poured out all my concerns to him and he scolded me for giving up on treatment. He convinced me to bring Hemanth to to Bangalore and promised to put me in touch with doctors who would save him,” explains Radha.

Hemanth with his mother and sister
Thanks to the sincerity of one good doctor, Radha brought Hemanth to Appollo Hospital, Bangalore. With fundraising, Hemanth has a chance of getting a liver transplant and beating his chronic liver disease. For the first time in years, Radha is feeling hope for Hemanth and for the future.

Hemanth is waiting for his life to begin

Hemanth sorely regrets not being able to attend school regularly and study well. He studies with his little sister Sirisha when he can't go out. He has been hearing that he needed an operation for a long time. He asks his mother why they didn't get him the operation that would let him have a normal life instead of getting small treatments every month.
Now that there is some hope of recovery Hemanth wishes he gets the transplant that will let him help lead a normal life and help his mother and sister.

The specifics of this case have been verified by the medical team at the concerned hospital. For any clarification on the treatment or associated costs, contact the campaign organizer or the medical team.
Give Radha's hope for Hemanth your support. Click here to contribute to Hemanth's liver transplant.
Donate 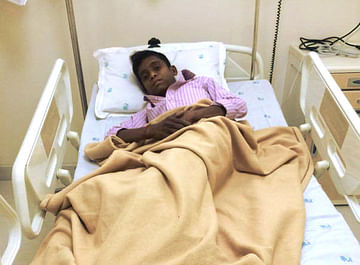 For the first time, Hemanth (17) is hopeful he will live and have a normal life. Contribute and...