7-Year-Old Who Was Just Days Away From Starting A New Life Is Now Breathless In The ICU | Milaap
loans added to your basket
Total : 0
Pay Now

Shares
Shares
Share on whatsapp
Little Harsh used to look like any other normal child. His bright smile and endless chatter may prompt anyone to think that he is healthy and fine. But the truth is something else. He is 7 years old and old enough to be in class 2, but he has never been to school for more than 6 months. He was suffering from thalassemia - his body produced lower than normal amounts of hemoglobin. He underwent a bone marrow transplant – the only cure for his condition – recently, and was looking forward to starting a new life; one free of painful injections and weakness. But unfortunately, he developed complications and is currently critical in the ICU.


“For one week after the transplant, he was completely okay. He was smiling all the time as he was so excited about getting better once and for all. ‘Now, I will also go to school in the morning’ he would say. He was also telling me about buying new books, pens and colour pencils. Now look at what happened to him,”-Riya, mother.

‘He wants to tell us something, but he cannot’

One day last week, at around midnight, Harsh developed shivers and patches started appearing all over his body. Before his alarmed parents could take stock of what was happening, he started having seizures and at one point started gasping for air. As the Jaipur hospital in which he was admitted did not have a ventilator, he had to be rushed to another super-specialty hospital in the dead of the night. He was found to suffer from pneumonia as a result of reaction to certain medication and he is completely dependent on oxygen support.


“He looks at us, with tears streaming down his face. He wants to say something to us, but his whole face is covered with equipment to support oxygen supply. He tries communicating with his hands, but we cannot understand what he means. I hold his hand tight so he understands that Mumma and Papa are never going to leave his side,”-Riya

Harsh’s father Mahesh is a salesman at a textile shop in Gujarat and earns just Rs 10,000 a month while his mother Riya is a housewife. The couple has another kid, Tania (11) who fortunately was born normal. Ever since Harsh was diagnosed with thalassemia, they have been struggling to pay for his transfusions and medicines.

Riya and Mahesh had been saving up and borrowing money for almost two years to fund his transplant. They had sold whatever they owned – including jewellery, furniture and even scraps to make sure that their son would get a new lease of life. But the post-transplant complications were completely unexpected - now they have nothing left to continue his treatment.


“We don’t have money for food and daily necessities also anymore. Everything was spent on his transplant, now we are helpless. Please lend a helping hand in this difficult time,”-Mahesh.

With your kind contribution, these parents can save their child and give him the life he dreamed of 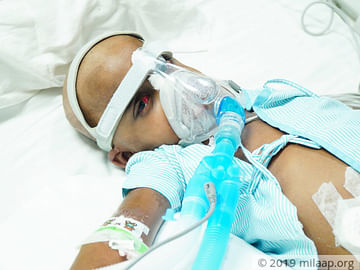 He Cannot Breathe On His Own And Is Critical

This 7-year-old can be saved with prolonged ICU care. Please support.