Father Kept His Son’s Cancer A Secret To Protect Family But Now He Can’t Save Him On His Own | Milaap
loans added to your basket
Total : 0
Pay Now

“A few days ago, my son found out he has cancer. The first thing he asked me is if he will survive, but he did not cry. He’s not scared or worried – he’s sure he will fight the disease and go back home. But as a father, I’m letting him down. It’s my responsibility to protect him from the pain, and I feel I have only failed thus far. I don't even have the means to get him treated, ” – Andanayya, father

Andanayya travels from Bagalkot to Bangalore once in two weeks to be with Gangadhar. He can’t stay with him through his cancer treatment, no matter how much he wants to. The only way he can continue his chemotherapy is if he works, but this farmer is at a dead-end.

He kept his son’s cancer a secret for weeks

In January when Andanayya found out that Gangadhar (13) has cancer, he decided that he would do all it takes to save his son – alone. His wife, Ratna, is mostly unwell these days, and he didn’t want her to worry. However, Andanayya now knows that he can’t do it on his own. The treatment is just beyond his means, and the emotional stress of watching his own child go through the pain of cancer is overwhelming.


Gangadhar with his sister

“I took him to 3 hospitals because he had severe pain at the back of his neck. At the third hospital, I found out that he has bone cancer. I kept it to myself for a long time, I thought I could do it on my own. But 15 days ago, my wife also found out our son has cancer. We haven’t spoken about it ever since."

The silence between Ratna and Andanayya is because they fear losing their son every single day. Gangadhar needs continued chemotherapy and surgery to fight this aggressive cancer. Gangadhar has Ewing's sarcoma of the cervical vertebra, a cancerous tumour on his spine. The tumour behind his neck is only growing rapidly.

Confined to the four walls of the hospital, all he can do is stare into oblivion

“He is strong but silent. He just spends his time staring ahead in the hospital. Not only has cancer changed how he looks, but also the talkative Gangadhar we knew is gone.”

With failed crops and no rain, this father is struggling to afford treatment


“I have to work to feed my family and continue his treatment. I have 2 other children to take care of too. But my daily income of Rs. 200 by working on other’s farms isn’t enough to afford his treatment costing lakhs. We have no water here in North Karnataka, the crops on the 2 acres of my land are failing.”

The specifics of this case have been verified by the medical team at the concerned hospital. For any clarification on the treatment or associated costs, contact the campaign organizer or the medical team.
Click here to save Gangadhar
Donate 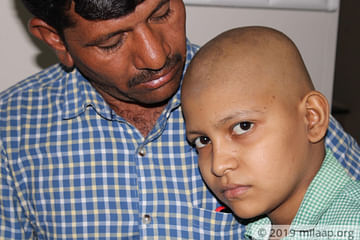 The Tumour On His Spine Is Rapidly Growing

Gangadhar needs chemotherapy to survive cancer. You can help save him.