"Since birth, my son has spent most of his days in the hospital. He never realized that he is sick until he saw his younger sister growing up active and playing all the time. He has never played outside, he cannot even walk fast without struggling to breathe. I did everything possible to help him recover but now he needs a third surgery to survive. My husband left us and he refuses to help. I can't save my son on my own this time," - Malar, mother of 12-year-old Dinesh.

Despite having 2 major heart surgeries, he is not out of danger yet

Dinesh was born with a heart disease and it was left unnoticed during Malar's pregnancy scans. He has multiple holes in his heart which makes his heart and lungs work harder resulting in fluid build up in the lungs. He was struggling to breathe and was kept in ICU for a week when he was born. He was severely underweight for the surgery and became fit only when he turned 2. The doctor said that he may or may not need a surgery when he grows depending on his condition. Malar's nightmares came true - despite all her efforts, Dinesh had to undergo an urgent surgery a year back.


"He has never missed any medicines and monthly check ups. He is tired all the time. He has never been able to run or even walk fast, but still he managed to do well in his studies. He was happy in his own world and was hopeful that one day he will be able to do everything that he likes." - Malar

Dinesh with his sister

Dinesh was used to the hospital visit over the years, but seeing his sister Divya (7) growing up, he realized that he is not like other kids. His mother consoled him saying that he would be fine soon and he can also have a normal life. He thought a few more dosages of medicines would make him better. He was completely shattered when his condition became worse and he had to be admitted for surgery.


"He was on bed rest for a year, he became extremely weak and was hardly able to stand on his own. He used to help his sister in her homework, tell her stories but he was too weak and demotivated to do anything. It is so painful to see him losing hope. When he was close to recovery, he again got severe breathing trouble and his skin turned blue. Doctors said he needed another surgery to remove the blocks in his heart." - Malar

She has been taking care of Dinesh all on her own, she needs your help now

Malar earns Rs 8000 per month and with the help of the people in the office she cleans at, she managed to continue the treatment for Dinesh. Her husband left her 5 years back, and although he is aware of Dinesh's condition, he hasn't helped with the treatment till now. She has already run out of insurance plans and has nothing left with her for the surgery. She needs 3 lakh and without your help, all her efforts will go in vain. 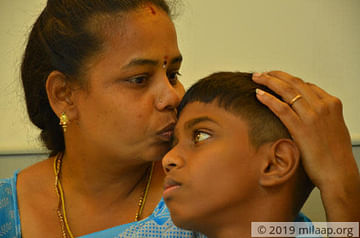 With no help from husband, this poor mother struggles to save her son.